Blitzboks progress in Dubai, but there’s work to do

Neil Powell's charges show the bit of inexperience in their ranks with a last-gasp loss to Argentina though their good earlier in the day means it's not a train smash. 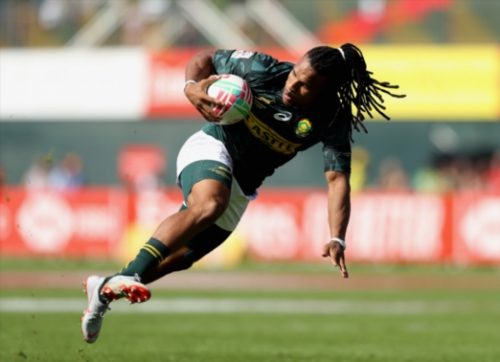 A blip on the radar or a foretaste of some difficulty ahead?

Blitzboks coach Neil Powell will hope for the first scenario after his charges ended the pool stage of the Dubai Sevens with a clumsy 12-17 defeat to Argentina on Friday.

It doesn’t hinder their progress to Saturday’s playoffs as the South Africans still topped pool A following wins over Zimbabwe (31-0) and Samoa (19-12), but the fact that they were actually part of a three-way tie on seven log points illustrated the competitiveness of the group.

The loss to the Pumas in particular exposed the Blitzboks’ lack of experience within their ranks.

Debutant Impi Visser was sent to the sin bin for two minutes following a professional foul and didn’t exactly cover himself in glory upon his return, conceding a vital turnover when a carry was ripped out of his grasp fairly easily.

Similarly, Ryan Oosthuizen didn’t always read his lines on defence and was another one to concede a turnover, though he seemed a bit unlucky in that instance.

But the killer blow for the current overall title champions was another yellow card, this time for Shakes Soyizwapi, who failed to keep a robust tackle down.

It did, in hindsight, feel as if it was coming given how South Africa generally aimed their hits too high throughout the game.

Franco Sabato scored the winning try from that indiscretion.

The Blitzboks are known for their depth, but the loss of Justin Geduld for the rest of the weekend will also prompt a re-think from Powell and his brains trust.

The 25-year-old was outstanding as a playmaker in this first two matches.

He had a hand in four of the Blitzboks’ tries against Zimbabwe, showing a wonderfully diverse set of skills.

It was his tactical kicking though that simply stood out.

Two pinpoint cross kicks over the tryline – for Kyle Brown against Zim and Soyizwapi against the Samoans – were delightful to watch.

South Africa did seem to miss his organisational ability against the Pumas.

In fairness, when they do turn on the heat and class, they still prove ruthlessly efficient.

There was more than enough instances of suffocating defence and fine counterattacking.

It will now simply be about making sure those moments of brilliance aren’t mixed with a lack of accuracy.