South Africa's troubles from the previous day continues as a tactically superb England beat them at their own game in a cup quarterfinal. 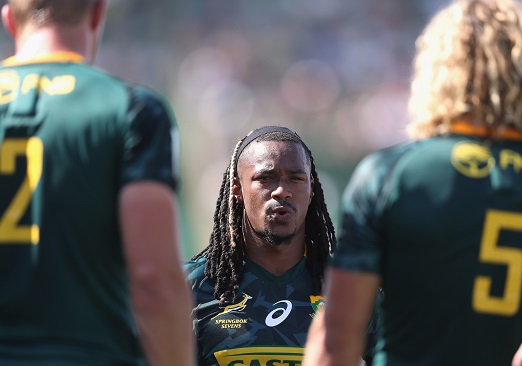 Branco Du Preez of South Africa looks on during the match between South Africa and Zimbabwe during Day Two of the Emirates Airline Dubai Sevens, the first leg of the HSBC Sevens World Series at The Sevens Stadium on November 30, 2018 in Dubai, United Arab Emirates. (Photo by Francois Nel/Getty Images)

The Blitzboks’ defence of their Dubai Sevens title ended in a whimper after slumping to an unexpectedly emphatic 5-22 loss to England in the cup quarterfinals of this year’s edition on Saturday morning.

Frustratingly, Neil Powell’s charges were undone by the same errors and indiscipline that dogged them at times on day one and could also only grin ironically at the fact that the English beat them at their own game.

The Roses were tactically magnificent, focusing on the type of relentless defence that has characterised South Africa’s immense success over the past two years and used Ethan Waddleton to be a pest at the breakdowns.

More importantly, their experienced band of players, such as skipper Tom Mitchell, Tom Bowen and Dan Norton, were instrumental in ensuring that counterattacking opportunities were exploited ruthlessly.

The Blitzboks also had themselves to blame in certain instances.

It was Shakes Soyizwapi’s knock-on at a defensive lineout that allowed England to launch the attack for their opener, while they were left with too much to do once Phil Burgess scored an intercept try.

That passage of play was indicative of South Africa’s day.

Werner Kok launched one of his trademark run, in the process flattening Mitchell, before finding Rosko Specman, who nine times out of ten would’ve kept the move alive.

But his offload was rushed and he merely found Cornishman Burgess.

The Blitzboks are now relegated to the playoff for a spot in the fifth place final.