Pote: You can’t tell Embrose what to do

But don't let the Bulls coach freak you out with that comment... 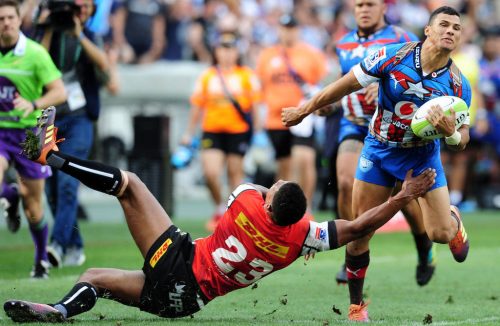 During last year’s Currie Cup, an awkward situation between the Blue Bulls and the Springboks was brewing.

Embrose Papier was part of the national squad – technically one of top three scrumhalves in the country – but he wasn’t always considered good enough to start.

But a solid year-end tour and the pre-season has convinced the Bulls coach of the 21-year-old’s worth.

And, encouragingly, Human has adopted the right mindset for using him.

“You can’t tell him what to do because he is a special player with special talents,” the Bulls mentor said after selecting Papier to start on Saturday against the Stormers at Loftus.

“He must play what he sees in front of him and be given the opportunity to express himself and show us his talent.”

People familiar with the Bulls’ fortunes over the last decade or so will immediately realise how significant those words are.

The franchise has been guilty way too regularly in the past of shackling certain mercurial talents, boxing them into a game-plan instead of building it around them.

Human doesn’t seem to want to fall into the same trap.

“If you put him in a set mindset‚ you will restrict his ability to express himself and that will hamper his development. He has a great feeling for the game and I will encourage him to go out there and enjoy himself while sticking to processes and fundamentals of the team,” he said.

“He’s a Springbok already but he is still a youngster who must not be burdened with pressure too pressure.”

Known for his prodigiously crisp service – a strength that already stood out at school level – Papier impressed all and sundry in his run-on Bok debut against Scotland last year, illustrating his ability to step up immediately.

“I really believe that this will be the year he comes of age and shows the world what he’s truly made of. He has a big heart and most importantly he has a good head on his shoulders.”