WATCH: I’m not the darling of Loftus yet, says Rosko

It took the Blitzboks just over three minutes to light up the new Super Rugby campaign. 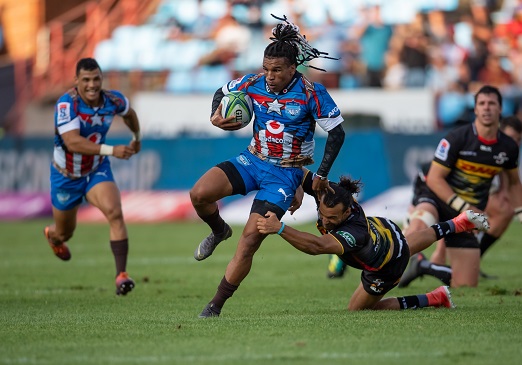 Rosko Specman of the Vodacom Bulls in action during the Super Rugby match between Vodacom Bulls and DHL Stormers at Loftus Versfeld on February 16, 2019 in Pretoria, South Africa. (Photo by Anton Geyser/Gallo Images)

Rosko Specman merely laughed after being asked whether he’s the new darling of Loftus.

“Not a chance! I can’t say I’m a darling yet. It’s only my first match, I don’t want to put undue pressure on myself. It’s a long road that lies ahead.”

Regardless, it took the Blitzboks legend Rosko just three minutes to leave an almost indelible mark on Super Rugby.

Recruited late last year by the Bulls to make another stab at fifteens, the 29-year-old put his franchise on the road to a sumptuous 40-3 win over the Stormers at Loftus at the weekend by scoring the opening two tries.

Both were thrilling efforts.

The SPECMAGIC has arrived in Pretoria ????⚡️

Specman first brilliantly picked up a substandard pass on the left before ghosting past the flailing tackles of Dillyn Leyds and Wilco Louw to dot down.

15 minutes later, the 29-year-old was fed a sublime inside pass from the impressive Warrick Gelant before evading another three tackles.

Loftus is playing witness to some truly magical rugby from @speckmagic11 ????⚡️

He was denied a hat-trick by a stray Bulls hand in a rare Stormers attacking move that fell flat, but the impression had been made.

“I have to be honest, I really didn’t think I was going to deliver a performance like that, especially on debut,” said Specman.

“I really have to give credit to my teammates though. The guys really did everything up front. They consistently got over the advantage line and fell back quickly when defending. Either way, there was always space to work with.

Unlike his Blitzboks teammate Seabelo Senatla, who hasn’t yet found his mojo at this level, Specman adapted very quickly.

Yet he believes that’s not really surprising.

He did, after all, start his career as a fifteens player.

“It wasn’t difficult for me to come back to the format,” said Specman.

“I played some Pro14 for the Cheetahs last season and I always knew if also wanted to play Super Rugby.”