Sharks maintain their perfect start to the season

But their continued inability to translate dominance into points against the Blues means their still a work in progress. 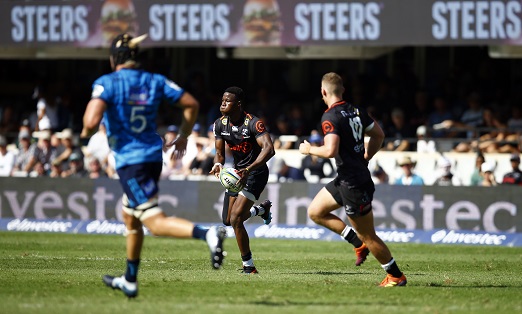 Aphelele Fassi of the Cell C Sharks during the Super Rugby match between Cell C Sharks and Blues at Jonsson Kings Park on February 23, 2019 in Durban, South Africa. (Photo by Steve Haag/Gallo Images)

The Sharks produced a typically Jekyll-and-Hyde performance in beating the Blues 24-7 at Kings Park in Durban on Saturday.

Their varied play in the first half was impressive and should’ve translated into the a match-winning buffer by half-time.

Yet the Durbanites once again slacked off after the turnaround and continued to butcher chances, before an intercept at the death by Curwin Bosch saw them gain a bonus-point.

Blues blindsider Dalton Papali’i confirmed his burgeoning reputation with gritty performance, particularly at the breakdown, even though he did prevent a try for his side through obstruction at a scrum. However, the star of the show was Lukhanyo Am. The Springbok midfielder produced a superb, varied display where he showcased all his skills at various stages. He broke the line twice, created the first try with a deft chip forward, stole a breakdown ball and made his tackles, including the cruncher that led the Sharks’ final try.