The Springbok midfielder is undoubtedly SA's best back early on in this year's Super Rugby campaign. 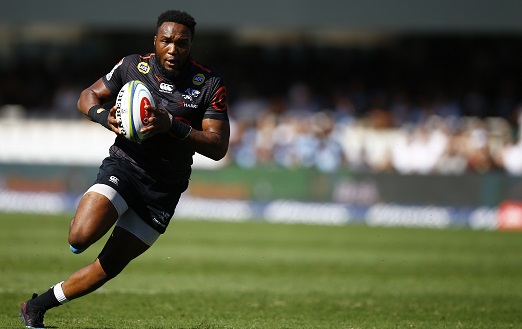 Lukhanyo Am of the Cell C Sharks during the Super Rugby match between Cell C Sharks and Blues at Jonsson Kings Park on February 23, 2019 in Durban, South Africa. (Photo by Steve Haag/Gallo Images)

Lukhanyo Am believes Robert du Preez is the “general” of the Sharks’ backline.

He’s being modest … and perhaps even wrong.

One of the features of the Durbanites’ early form in the Super Rugby campaign has been how the 26-year-old midfielder has been the string-puller.

It was his delightful run into space and delayed pass that proved pivotal in S’bu Nkosi’s try against the Sunwolves.

His no-look pass set up Makazole Mapimpi’s score later on in the same match.

Last week, Am’s brilliant chip into space was the catalyst for Aphelele Fassi’s try and a crunching tackle on Blues pivot Otere Black allowed for a pass under pressure to be intercepted by Curwin Bosch.

“Yeah, I’m feeling good about my game,” Am said rather humbly.

“There’s a great energy in the team, there’s a sense that everyone’s involved and have to take responsibility – from No 1 to 15. After round two I’d say I’m reasonably impressed with the way I’ve been going.”

Yet that’s where the self-praise ends for the Springbok centre.

Instead, Am highlights the potency of the men he’s been creating opportunities for – a cracking back three of Nkosi, Mapimpi and Fassi.

And they certainly have done their part in capitalising on them.

“We’ve got a really nice back three. We also back everything that they do,” said Am.

However, Sharks supporters might have enjoy this dynamic while it lasts as Du Preez leaves at the end of the campaign for English side Sale.

“I can’t really say what will happen to our continuity. I guess it’s something that happens in rugby (player departures),” said Am.

“But we’ve got a large, talented squad. We’ll miss our departing players, but I’m sure a new guy will step up.”