The Lions coach insists he needs to be held accountable for the comprehensive defeat to the Bulls. 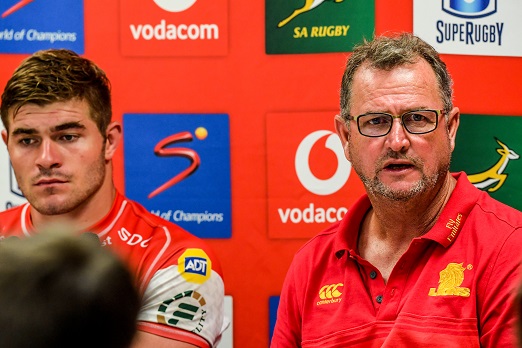 Malcolm Marx of the Lions and Coach Swys de Bruin of the Lions during the Super Rugby match between Emirates Lions and Vodacom Bulls at Emirates Airline Park on March 02, 2019 in Johannesburg, South Africa. (Photo by Sydney Seshibedi/Gallo Images)

The Lions were taught a “rugby lesson”, coach Swys de Bruin admitted after his team went down 30-12 to the Bulls in
their Super Rugby clash at Ellis Park at the weekend.

It resulted in the Lions dropping to the bottom of the SA Conference, which was the worst position they had found themselves in the last four years.

De Bruin, who admitted they were out-muscled, said their opponents resembled the Bulls of old, with their pack in total control and flyhalf Handre Pollard keeping the scoreboard ticking over.

ALSO READ: How a 37-year-old outplayed the best hooker in the world

“No excuses. We were outplayed by a much better team on the day,” De Bruin said.

“We’ll have to go and work very hard to rectify our mistakes, but congratulations to the Bulls. They totally outplayed us and taught us a rugby lesson.”

The Bulls recorded their first win at Ellis Park since 2012, spearheaded by a dominant pack.

They built a commanding lead of 17-0 before the Lions could put their first points on the board through a try by prop Carlu Sadie eight minutes after the break.

While each team scored two tries, Pollard racked up 20 points as he punished the Lions for their ill-discipline and rewarded his pack for overpowering the hosts, with the Lions simply folding.

Though the Bulls could strengthen their position with a home win over the Sharks this weekend, after they settled in
second place behind the coastal outfit in the SA Conference, the Lions were hoping to bounce back at home against the Jaguares.

“We’ll have to go and analyse the game, but we never had the ball for the first 24 minutes. So well done to them,” De Bruin said.

“We need the ball to play against a team like the Bulls. They suffocated us and we battled in the air. I’ll have to go and count all the aerial kicks we missed, but I don’t think we caught one.