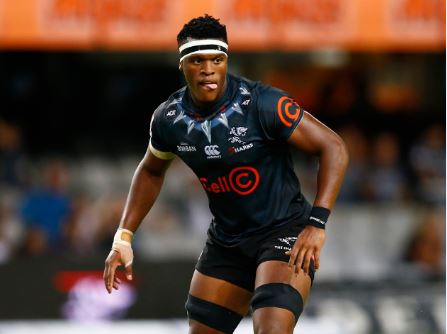 There are few better examples of experience mingling with enthusiastic youth than the Sharks’ match-day squad for Saturday’s meeting with the Rebels at Kings Park.

On the one end of the spectrum, Phendulani ‘Pepsi’ Buthelezi will make his Super Rugby run-on debut as a 19-year-old openside flanker.

At the other end, a former favourite son, 33-year-old Craig Burden, makes a fairy tale comeback of sorts after he crack the nod for short-term contract following a successful trial.

Yet it’s the still teenaged Buthelezi whose elevation will have tongues wagging.

The Junior Springbok, who’s still eligible for this year’s Under-20 World Championship, has made rapid strides after just one season of age-group rugby in 2018.

More importantly, the Sharks rookie is six years younger than the All Black.

If Buthelezi is this big as a teenager, imagine his physique in three years’ time.

It’s a tantalising prospect, especially given his own desire to “provide flair and a (Savea-like) work rate”

Even coach Robert du Preez, a man of infamously few words, took time out on Thursday to highlight the selection.

“We all know his pedigree at such a young age. I’m really looking forward to see how he goes and I’m pretty sure he’s even more excited. Pepsi’s been great in training. In fact, he’s been great all year.”

“We’re happy to bring him in. He’s an experienced campaigner. He was an absolute stalwart when he played here previously,” said Du Preez.

“He brings a lot of athleticism to our setup. That said, we’ve given youngsters like Fez Mbatha and Kerron van Vuuren chances this season. We’re blessed with a nice group of hookers.”