These are the men that could replace Siya Kolisi

With the news that the Springbok captain will have to prove his fitness in the Currie Cup, Rassie Erasmus has the luxury of quite a number of fish in the pond. 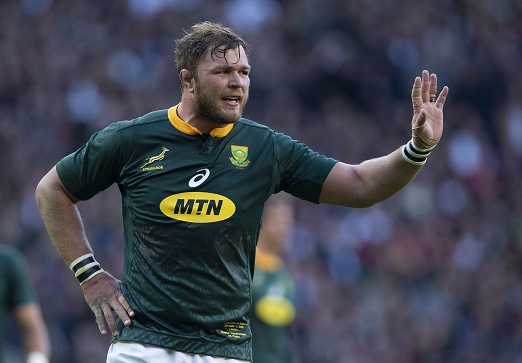 Duane Vermeulen of South Africa during the Quilter International match between England and South Africa at Twickenham Stadium on November 03, 2018 in London, United Kingdom. (Photo by Visionhaus via Getty Images)

Springbok coach Rassie Erasmus is set to spread his net wider to find a stand-in skipper for regular captain Siya Kolisi for the first two Tests of the Rugby Championship.

Erasmus said on Monday in Pretoria that Kolisi’s knee injury will probably see him miss the opener against Australia at Ellis Park on July 20 and the Test against the All Blacks in Wellington a week later.

On Wednesday, SA Rugby subsequently stated that the loose forward will prove his fitness in the upcoming Currie Cup.

These are the candidates to take over the interim captaincy: The robust lock is a former captain in the Green-and-Gold  having lead the side in 10 Tests in 2017 following an injury to first-choice leader Warren Whiteley. He had the ignominy of presiding over the record 57-0 embarrassment at the hands of the All Blacks, but always led from the front.

The veteran No 8 is a presence in any team and while he hasn’t ever been appointed a permanent captain during his career, the 32-year-old did a decent job deputising for the Bulls occasionally in Super Rugby this season. Given the short-term focus of the role, Vermeulen would probably be an ideal candidate. 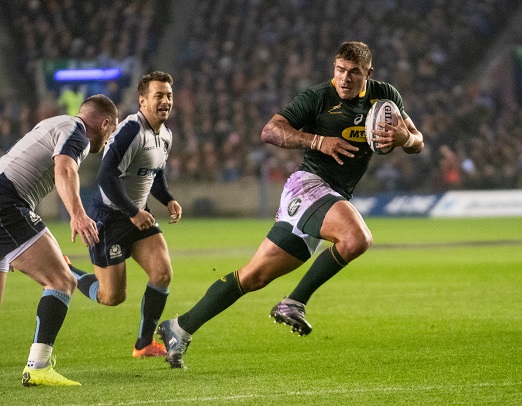 South Africa’s Malcolm Marx, breaks through the Scotland defence during the International Friendly match between Scotland and South Africa on November 17, 2018 in Edinburgh, United Kingdom. (Photo by MB Media/Getty Images)

No-one would’ve realistically entertained this thought at the start of the year, but the world-class hooker has raised his leadership profile after Lions coach Swys de Bruin installed him as the unlucky Whiteley’s deputy in Super Rugby. Seemed to draw a lot from the experience around him, which would make him an interesting candidate should Erasmus decide on a more all-for-one, one-for-all approach. Handre Pollard of South Africa during the International Friendly match between Wales and South Africa at Principality Stadium on November 24, 2018 in Cardiff, United Kingdom. (Photo by Michael Steele/Getty Images)

A man who’s always relished extra responsibility, Pollard showed as stand-in Bulls captain that he can combine a leadership role with consistent individual performances. But will Erasmus feel comfortable with a similar arrangement at international level? The versatile forward skippered the Boks in last year’s one-off Test against Wales in Washington and is now regarded as a senior player in the national camp. The fact that he’ll still be alternated between blindside flank and lock means he could be a strong candidate as he won’t necessarily be a victim of Erasmus’ expected rotation policy. Steven Kitshoff of the Springboks during the Rugby Championship match between South Africa and New Zealand at Loftus Versfeld on October 06, 2018 in Pretoria, South Africa. (Photo by Lee Warren/Gallo Images)

Turned out to be a calm leader in the latter stages of the Stormers’ Super Rugby season, though a similar role in the national setup seems unlikely.

.For more sport your way, download The Citizen’s app for iOS and Android.

Play well in URC and Bok door will open, says coach Nienaber
20 mins ago
20 mins ago

Play well in URC and Bok door will open, says coach Nienaber
20 mins ago
20 mins ago