Where did Bok newbie Rynhardt Elstadt suddenly come from? In a Springbok group that features many familiar faces, Rynhardt Elstadt stands out like a sore thumb.

Where on earth did this hardworking but unfashionable former Stormers flanker suddenly appear from?

The 29-year-old left Newlands in 2017 to join French club Toulouse and, much like his teammate Cheslin Kolbe, immediately raised his profile.

ALSO READ: These are the men that could replace Siya Kolisi

Elstadt’s overall attitude and appetite for the physical stuff clearly holds appeal for national coach Rassie Erasmus, who subsequently made him a potential World Cup bolter.

Given that he’s played at lock before, there’s a view that the man from Montagu could be the Boks’ 2019 version of Danie Rossouw.

The Bulls legend, who floated between the lock and flank positions with distinction in his international career, was a revelation as Jake White’s No 8 in 2007’s World Cup title-winning campaign.

Danie Rossouw of South Africa is tackled by Kurtley Beale of Australia during the 2010 Tri-Nations match between the South African Springboks and the Australian Wallabies at Vodacom Park on September 4, 2010 in Bloemfontein, South Africa. (Photo by Duif du Toit/Gallo Images/Getty Images)

Yet Erasmus is reluctant to categorise Elstadt as such, particularly as a lineout jumper.

“He’s a little bit short for a front lock,” said the Bok coach.

“But he can definitely do the physical work of that role. If all our specialist locks are fit though, I don’t see him slotting in there. He can certainly do the job should we need him.”

Instead, Erasmus seems to view Elstadt as an almost like-for-like replacement for the injured Siya Kolisi, who’ll need to prove his fitness in the less demanding climate of the Currie Cup.

In fact, the national mentor makes no secret of the fact that he prefers a bigger openside flankers.

“Rynhardt is in a similar mould and, as a bonus, he can also play on the blindside, in the No 7 jersey.” 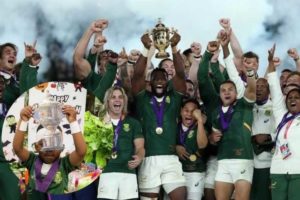 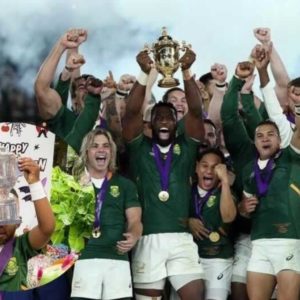 'This means more': Siya Kolisi sends a shoutout to his three-year-old fan
7 days ago
7 days ago

'This means more': Siya Kolisi sends a shoutout to his three-year-old fan
7 days ago
7 days ago