De Villiers: Frans Steyn will add value wherever he plays

The enigmatic midfielder looks a shoo-in for the World Cup. 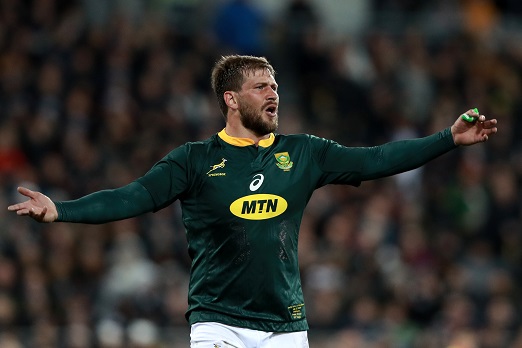 Jean de Villiers and Frans Steyn go back a long way … all the way back to 2007, in fact.

It was at that year’s World Cup in France where De Villiers tore his bicep in South Africa’s opening fixture of the tournament against Samoa.

Ruled out for the rest of the competition, De Villiers was replaced in the Bok starting line-up by the then-20-year-old Steyn, who would become a key member of the side that lifted the Webb Ellis trophy in Paris for South Africa’s second World Cup triumph.

Back then, Steyn was primed to be a Bok great.

A combination of injuries and a rather sticky contractual dispute with SA Rugby, however, means that he has just 59 Tests to his name when many more seemed likely 12 years ago.

There is no changing the past, though, and Steyn is now very much in the Springbok frame once more and will almost certainly be named in Rassie Erasmus’ 31-man squad for the World Cup in Japan starting next month.

Speaking at a Laureus Sport for Good breakfast at the Southern Sun in Newlands on Wednesday, De Villiers opened up on the Boks’ midfield options heading into Japan.

It looks like Erasmus is leaning towards fielding Damian de Allende at No 12 and Lukhanyo Am at No 13.

Both provide the Boks with physicality in abundance on both attack and defence, and De Villiers agrees that Erasmus looks to have settled on that combination.

He has been particularly impressed with De Allende, who has long been a player that divides opinion.

“I think it is the one that they’ve settled on and I thought Damian had an outstanding game on the weekend (against Argentina in Salta),” De Villiers said.

“It’s maybe not traditional 12 skills that he showed, but the ability to steal ball, create turnovers and be really strong in that channel is important to the team as well.”

That selection is likely to Steyn used as a bench option when the Boks take on the All Blacks in their tournament opener on September 21 in Yokohama.

With his ability competently cover a range of positions in the backline, having a player like Steyn on the bench opens up other opportunities for Erasmus elsewhere.

For De Villiers, Steyn will play a key role for the Boks wherever he plays.

“Having Frans Steyn there will add value, whether he is starting or coming off the bench,” De Villiers said.

“He’s still relatively young. He has the fire to still go out and prove people wrong and show what he’s got, because we all know that he’s got a lot of talent and brings a different dynamic to whatever position he plays.

“He brings that experience, so the depth we have and the combinations that have been tested put this team in a really good position.”

Steyn will play off the bench in Saturday’s one-off Test against Argentina at Loftus.