Meanwhile, hero S'bu Nkosi admits he 'didn't think much' when scoring his cracking brace of tries. 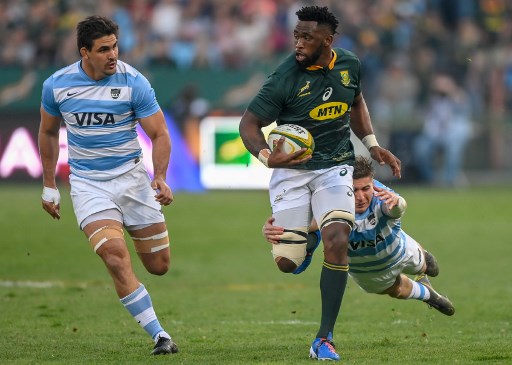 Springbok coach Rassie Erasmus is closer to finding the last few pieces of the puzzle in building his World Cup squad after his side struggled to a 24-18 win over Argentina at Loftus Versfeld on Saturday.

While wing S’bu Nkosi cemented his place with a Man-of-the-Match performance, according to the coach, Erasmus admitted there were still a few grey areas in terms of selection.

“We can only take so many loose forwards and so many props,” Erasmus said.

“With some we got confirmation, while others added some doubt, and I’m leaning more towards some after watching the game live, but I will have a proper look over the course of the next few days to make sure.

“We will take 37 guys to Bloemfontein on Sunday and we will work there until Wednesday.

“There were some good and some bad, but certainly we got some answers at the weekend.”

Nkosi said he had acted purely on instinct while scoring the Boks’ only two tries of the match.

“I”m not lying to you. I wasn’t thinking,” Nkosi said.

“It was like I was in the zone and my body reacted and just told me what to do, and I basically only woke up after scoring those tries.”

Watched by a crowd of just 29 383 spectators, Erasmus admitted he never though they would run away with the contest after going into the game with mix-and-match combinations.

“I didn’t really feel during the week we were going to have an open affair. You can ask the boys, I thought it was going to be the biggest grind ever,” he said.

“I thought the game would be won or lost in the trenches and it was a battle throughout, so we didn’t expect a running game. We were hoping for that but it never went that way.”

Erasmus, however, expressed his satisfaction with the comeback made by his World Cup captain Siya Kolisi at international level.

“Medically he is fine so that’s a great thing,” Erasmus said.

“The next thing is to get him match-fit, so we will try and simulate that a lot and give him some proper game time in the Japanese game on September 6.”

Erasmus said they had wanted to give Kolisi 30 minutes on the park to see how he lasted, but they had asked him how he felt after half-an-hour and received a positive response.

“I wanted to take him off but then Marcell (Coetzee) also got injured and at half-time I asked him if he wanted to go more and he said ‘yes’.

The World Cup squad is set to be announced on August 26 and the Boks are due to depart for Japan on August 30.