WATCH: Trevor Nyakane on baby duty at the cricket! 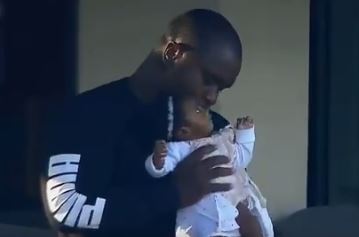 South Africans were given a glimpse of the latest addition to the Nyakane family after Springbok prop Trevor was caught on camera at Thursday evening’s MSL match between the Tshwane Spartans and Durban Heat in Centurion.

Asked a bit later by a SABC presenter whether he was more proud of his baby girl or his winner’s medal, Nyakane merely bellowed with laughter.

Look who we spotted at #MSLT20.

What a way to spend the afternoon with his little one.

His wife, Gavaza, gave birth shortly before the Boks’ World Cup opener against the All Blacks in Yokohama.

Nyakane had revealed afterwards that he was truly torn between staying at home and returning for the clash with the old enemy.

“I can’t believe that someone I’ve only met two, three days ago, I can miss this much,” he said.

“It’s awesome being a dad, and I can’t wait to go back to her. I told my wife that usually I enjoy travelling. Now, when I was about to leave, I couldn’t let go of my daughter.”

As it turned out, fate had other plans for him as he sustained a calf injury in the match, cutting short his World Cup campaign and leaving him in tears. Trevor Nyakane shows off the trophy to fans on the route during the Rugby World Cup 2019 Champions Tour on November 08, 2019 in Durban, South Africa. (Photo by Anesh Debiky/Gallo Images)

He was back though five weeks later to join in the celebrations.