There have been other weather-affected games in the delayed South African rugby season, most notably matches called off early at Loftus and in Kimberley earlier in the season. 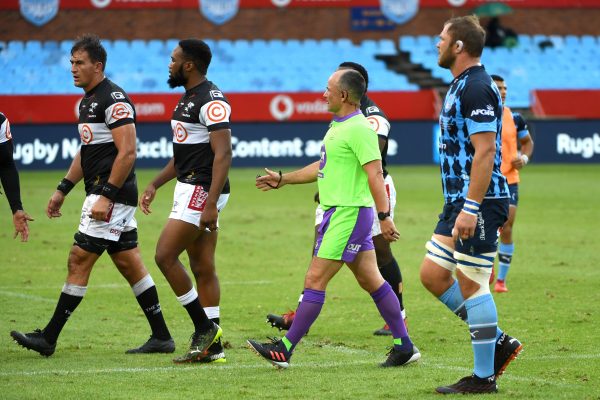 The players leave the field due to lightning during the Carling Currie Cup final match between Bulls and Sharks at Loftus Versfeld Stadium on Saturday. Picture: Getty Images

The 2020 Currie Cup final – being played for the first time in the middle of the South African summer – has been interrupted because of the threat of lightning.

Referee Jaco Peyper – in charge of his fifth final – took the players from the field midway through the first half of the final between the Bulls and Sharks at Loftus Versfeld in Pretoria on Saturday.

Peyper told the players that lightning had been witnessed within seven kilometres of the stadium, forcing him to take the drastic step.

The match was 25 minutes old.

The Bulls were in the lead 6-3 following two penalties by Morne Steyn. Curwin Bosch slotted the penalty for the visiting Sharks.

This is not the first time lightning has played a part in the delayed South African rugby season. A match was actually called off at Loftus Versfeld in the Super Rugby Unlocked competition, while a match in Kimberley was also halted early because of lightning in the area.

After a break of about 20 minutes the match was expected to start again around 4pm.