Tiaan Swanepoel and his ‘massive boot’ will grow with experience, says Lions coach

Swanepoel was moved from fullback to flyhalf in the absence of regular captain Elton Jantjies. 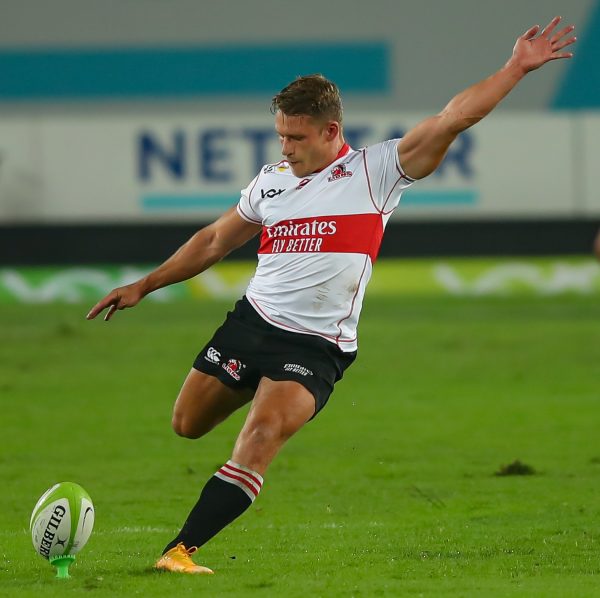 Tiaan Swanepoel in action for the Lions against the Pumas. Picture: Gordon Arons/Gallo Images

Despite kicking the Lions to a 32-28 win over the Pumas in their Preparation Series match at Ellis Park on Friday, flyhalf Tiaan Swanepoel might still be a work in progress.

Swanepoel kicked 22 points which included six penalties and two conversions, but according to Lions coach Cash van Rooyen there were still areas in his game which requires improvement.

“We all know Tiaan has a massive right boot, but obviously there’s something like game management that is going to take a bit of time, and it will take pressure situations for him to learn,” said Van Rooyen.

Swanepoel had been moved from fullback to flyhalf in the absence of regular captain Elton Jantjies, who was busy with conditioning work along with the other senior players.

“We will see how we can fast-track that game management as quick as possible, but a game like Friday night against a big forward pack and with the ball quite slippery and very wet, it’s definitely a big attribute to have a massive boot like that,” said Van Rooyen.

The Lions coach lauded the scrum performance of veteran prop Jannie du Plessis and credit him for leading the change in momentum after he replaced Wiehahn Herbst in the second half.

“I think Wiehahn was also good and played his part, but Jannie made a big difference to our set-piece and his experience and his age came through well for us,” said Van Rooyen.

“I think in a way it gave us momentum during the game and in that second half.”

With the Lions having come out stronger in the second half, Van Rooyen complimented the young side who had eight U-21 players introduced to this level.

“For a large part of the group it was their first big game and many of them haven’t played for a year,” he said.

For unlucky flank Roelof Smit, who had just returned from injury, another spell on the sidelines was probable after he picked up a knee injury.

“We can’t accurately say at this stage but it looks like his MCL, and with a MCL it (recovery) could be two weeks or longer,” said Van Rooyen.

“It’s not nice for him and after the game he was sitting in the changeroom (despondently), so one feels for him and one hopes it’s not serious and that he can soon play again after he has recovered.”