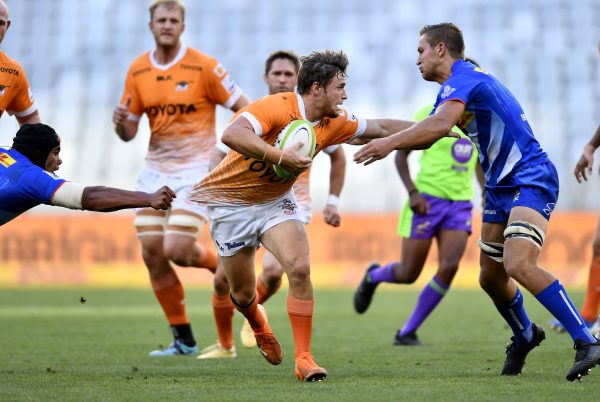 Reinhardt Fortuin surges forward for the Cheetahs in their clash with the Stormers. Picture: Gallo Images

There was little to be excited about, according to Cheetahs coach Hawies Fourie, despite his team surprising the Stormers with a 34-33 victory at Cape Town Stadium in their Preparation Series match on Saturday.

Trailing 26-21 at the break, the Cheetahs relied on two late penalties by centre Frans Steyn to edge out the home team, and Fourie believed the appearance from the bench of veteran scrumhalf Ruan Pienaar made the difference.

“Ruan definitely had a big influence in that last few minutes. He has a calm head on his shoulders and he has often been in these kinds of pressure situations,” said Fourie.

“He played the game perfectly and made good decisions in that last few vital minutes, and it was great for us to have him on the field.”

While wing Rosko Specman sparkled with his hat-trick of tries, Fourie was not impressed with how his team struggled at scrum time, with Ferreira getting a workover from Stormers tighthead Neethling Fouche.

“There were very few positive things for me, to be honest,” Fourie said.

“On the counter attack we did well, so that was for me a positive.”

ALSO READ: How very strange – a series of rugby matches with nothing at stake

Some of the other positives included the performances of Blommetjies, who made some good calls, and Specman, who was dangerous from the back.

“But apart from that there are few positives,” Fourie said.

“We battled in the set phases. The scrums improved in the second half but we lost some vital lineouts, and we didn’t maul well and made a lot of handling errors.”

It was only after half-time, when Conraad van Vuuren replaced Ferreira and Khutha Mchunu came on for tighthead Aranos Coetzee, that the Cheetahs scrum improved.

“When we started to see more ball we got back in the game,” Fourie said.

“But there was a time in the middle of the first half until half-time when we really found it tough.”