Boks v Lions: Five match-ups that could light up the first Test

Who will boss who in the first Test of the series at Cape Town Stadium on Saturday? 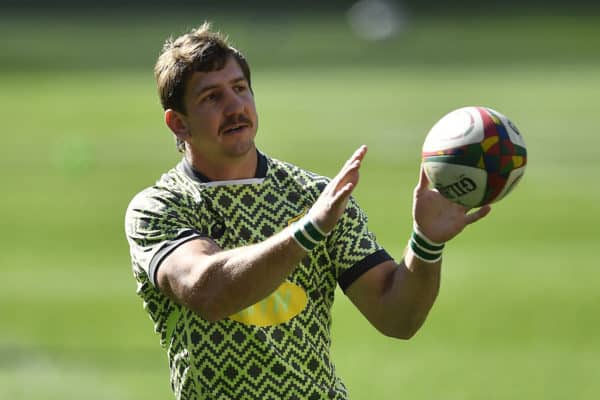 Springbok No 8 Kwagga Smith will go up against Jack Conan in one of the key Bok matchups in the first Test against the Lions on Saturday. Picture: Ashley Vlotman/Gallo Images

It’s finally here – the first Test between the Springboks and the British and Irish Lions.

The preparations have been completed, the selections made, the talking done.

It’s anyone’s guess who’ll come out on top after what should be a riveting 80-plus minutes of action at Cape Town Stadium.

There are quality players in both sides, but these are the five match-ups I’m most looking forward to seeing:

Not too many rugby fans would have predicted that World Cup star Kolbe would come up against SA-born Scotland and Lions wing Van der Merwe, but that is how it has turned out.

Kolbe’s quick feet, eye for the gap and speed make him one of the world’s most dangerous attacking players, while Van der Merwe banks on his power and speed to beat defenders.

The Bok star can expect plenty of attention from Van der Merwe and his team-mates who know they cannot afford to take their eyes off the winger.

Both men are dangerous with ball in hand, but who’ll stand up best in defence?

It’s the battle of the “littlies” – the men who need to supply the backs with quick, front foot ball, but also ensure the forwards keep moving in the right direction. In between, they’ll have a bit of a go at each other as well, and Bok fans will hope De Klerk stays calm and collected.

The Bok No 9, who plays for Sale in England, is the experienced World Cup winner who knows many of the Lions players, while Scotland’s Price won’t be too familiar with the hosts. He’s also a surprise pick, but a player highly regarded by his coaching staff, having featured four times on tour.

Expect both men to kick a lot.

With World Cup final man of the match Duane Vermeulen ruled out with injury and the Boks not having a ready-made back-up, former Sevens star Smith will wear the No 8 on his back. It’s a big call by the Bok coaches.

Smith is a strong man for his size, he’s quick, has good hands, and can be a nuisance at the breakdowns, but he’s no Vermeulen.

The selection of the 28-year-old Irishman Conan at No 8 is equally surprising by the Lions, but there’s no doubting his quality – he’s a strong ball-carrier and hard-hitting tackler; the Boks will have to keep an eye on him.

Well now, this should be a fascinating battle. There’s no doubt these two men rank among the best locks, if not players, in the world game. They have real presence and will be hugely significant in this match and the other two Tests.

Not only are they the go-to guys – the bankers – in the lineouts, they are also the men who bring the grunt, the hard edge, to their sides.

They’re the men to lead the forwards in the tight exchanges and make tackles at close quarters; they are the heartbeat of the packs.

But who will emerge as the king of the cauldron?

In the absence of Bok World Cup winner Beast Mtawarira, who is in retirement, and Steven Kitshoff, a leader of the ‘Bomb Squad’, rookie prop Nche has been tasked to fill the No 1 jersey. And it doesn’t get much bigger than this – a first Lions Test, as a starter and going up against the highly-rated Furlong, from Ireland.

With over 50 Tests to his name and a Lions banker four years ago, Furlong will again be viewed as one of his team’s key players.

Nche has been earmarked for a few years as the man to take over from Mtawarira; well, his time has come. A short, solidly built man, the 26-year-old faces the biggest challenge of his career.

No time for emotion, says Davids, as Boks search for solutions
1 hour ago
1 hour ago

Barrett: 'Boks will rise to challenge in 100th All Blacks Test'
8 hours ago
8 hours ago
PREMIUM!

No time for emotion, says Davids, as Boks search for solutions
1 hour ago
1 hour ago

Barrett: 'Boks will rise to challenge in 100th All Blacks Test'
8 hours ago
8 hours ago
PREMIUM!