In the video, Erasmus points out several questionable calls made by referee Nic Berry in the first Test against the Lions. 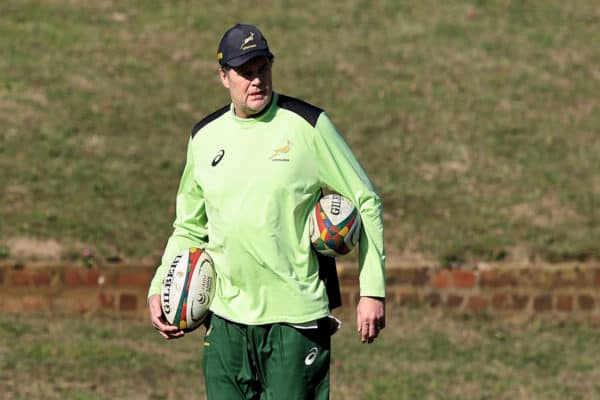 SA Rugby's director of rugby Rassie Erasmus has released a video pointing out refereeing decisions he found questionable from the first Test against the Lions. Picture: David Rogers/Getty Images

SA Rugby’s Director of Rugby Rassie Erasmus has released a one-hour, 26-clip video detailing how he believes the Springboks were unfairly treated during the first Test loss to the British and Irish Lions last Saturday.

In the video, Erasmus points out several incidents in the team’s 17-22 defeat and questions the decisions made by referee Nic Berry and his assistants.

He also talks about his role as team water-carrier and how it upset Lions boss Warren Gatland, the banter that has gone on between the teams, and the build-up to the actual first Test and a meeting with Berry.

Erasmus also talks about the appointment of the TMO, Marius Jonker, who received plenty of criticism after the match for some of the call he made.

Erasmus says later in the video that he is willing and prepared to step away from the rest of the series if World Rugby would prefer. He would also be accepting of being fined, but states, “If I get a fine or get the Springboks in trouble, know this is me personally.

“I believe in fairness and equal chance… and I will step away (if I have to).

“All the players want is to be respected equally.”

In one clip, Erasmus points out how Bok skipper Siya Kolisi is asked to move away from talking to the officials, while at the same time they listen to what Lions captain Alun Wyn Jones has to say.

The second Test between the Springboks and Lions is in Cape Town this weekend.