Besides wanting a greater contribution from the replacements, the Boks will hope that new No 8 Jasper Wiese also fires. 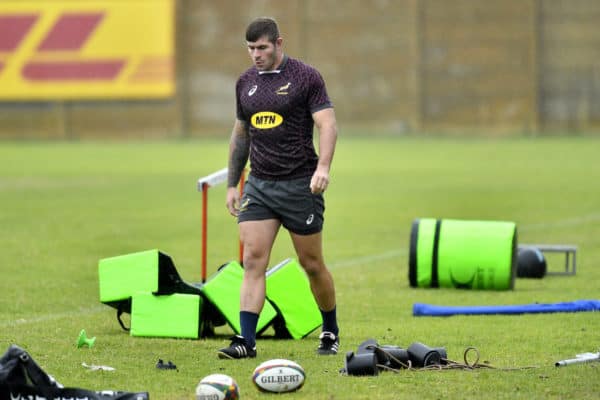 Springbok hooker Malcolm Marx is one of the men coach Jacques Nienaber will look to to give the team a boost from off the bench in the second Test against the Lions. Picture: Ashley Vlotman/Gallo Images

Rugby World Cup winners South Africa will seek more impact from the bench and more creativity in attack in Saturday’s must-win second Test against the British and Irish Lions in Cape Town.

The Springboks faded badly in the second half of the first Test at the same venue last Saturday.

Springboks head coach Jacques Nienaber believes an extra week together will bolster his team’s ability to stay in the game in the second half. Their build-up to the first Test was hit hard by a Covid-enforced quarantine of key players.

“We are now confident that the players in the squad will be able to deliver on the physicality and grit that will be required in this match,” Nienaber said when announcing a team with three changes in the starting line-up.

One key change is the inclusion of Jasper Wiese at No 8, with the Leicester back-rower offering more bulk and physicality than Kwagga Smith, the man he replaced.

The Springboks will hope Wiese is better able to fill the hole left by the long-term injury of Duane Vermeulen, man of the match in the 2019 World Cup final.

Vermeulen’s ability under the high ball was badly missed last weekend when the tourists put the Springboks under pressure with their kicking game.

Nienaber announced a replacements’ split of 6-2 between forwards and backs, indicating a return to the so-called “bomb squad” tactics that were a major factor in South Africa’s World Cup triumph.

The Springboks were effectively able to use two sets of tight forwards in the World Cup, with the replacements matching the starters in quality.

The replacement strategy failed in the first Test, when the Springboks had a 5-3 split because of concerns about the fitness of some of the backs who had been in quarantine.

A new front row was unable to dominate and conceded an early second-half penalty which led to the Lions scoring a try.

Nienaber has shuffled his front row for Saturday’s clash, a situation partially caused by a neck injury which ruled out loosehead prop Ox Nche, who was impressive before the break last week.

Despite crossing the Lions’ tryline three times in the first Test – with two tries being disallowed – the Springboks lacked cohesion in attack.

Nienaber admitted: “We created opportunities but we didn’t finish them, so we need to rectify that.”

The Lions, meanwhile, have focused on tightening up their game in the first half, with coach Warren Gatland highlighting the number of penalties his team conceded, which enabled the Springboks to get ahead.

“There won’t be a lot of space, particularly in the first 20 or 30 minutes,” said Gatland.

“They’re going to be incredibly aggressive and they’ll run hard, so it’s about staying in that arm wrestle.”

Gatland also made three changes to his starting line-up, while stressing the importance of the replacement bench to provide more attacking options later in the match.

“We’ve spoken about the bench and the impact off the bench,” he said in explaining how players such as utility back Elliot Daly and scrumhalf Ali Price could benefit if the game opens up.

“We have been happy with the way we have finished in the second half,” Gatland said of the Lions’ performances in losing narrowly to South Africa A and in the first Test.