REACTION: Lions slayer Steyn on doing it again for Boks

The 37-year-old flyhalf has been widely lauded for helping the Boks beat the Lions - as he did 12 years ago in the 2009 series. 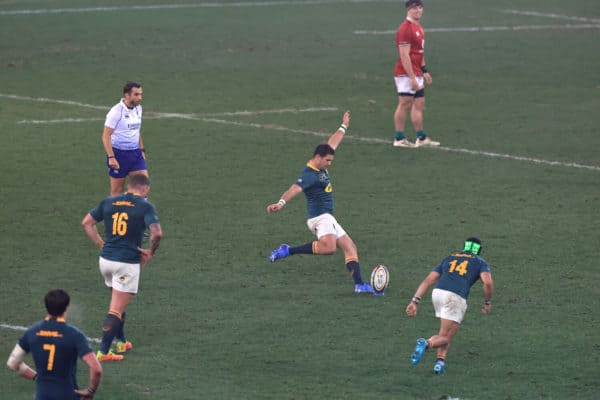 Every single Bok player has been lauded for their effort in helping the Boks do the almost unthinkable – beat the British and Irish Lions in a three-Test series after playing almost no Test rugby for two years since the World Cup victory in Japan at the end of 2019.

The storylines, across the team, are something else. But Steyn has stolen the headlines.

Steyn, picked after a five-year absence from the Test arena, did something no-one in their wildest dreams would have thought possible – he stepped up from off the bench at the Cape Town Stadium on Saturday and kicked two late penalties to help the Boks get over the line, as he did at the start of his career in 2009 to break Lions hearts in that series.

Who would have thought.

“It was almost in the same position (as in 2009 at Loftus Versfeld), just a bit closer… a bit better for the old legs. Luckily it went over. It was a great day for South African rugby,” said the 37-year-old, who’s never been a man of many words.

“It’s for special occasions like that. You put all the hard work in during the week, and through your whole career for kicks like that, for that one kick to win a series, to win a game, win a championship. Luckily it paid off today.”

Steyn was widely celebrated on social media, with many hailing the Bok replacement flyhalf – who slotted penalties in the 67th and 79th minutes to help the Boks win 19-16 and bag the series.

Springbok coach Jacques Nienaber called Steyn’s contribution late on in the series “amazing” and said he had difficulty looking at the final penalty kick.

“I had my head down between my legs when he kicked that last penalty goal, to be honest – I just could not watch,” he admitted.

“It was just happy for him that he succeeded – it is amazing that he did the same thing 12 years ago. I also want to congratulate the other two flyhalves in the group – Handré Pollard was great during the series and Elton Jantjies was just amazing this week for us. He contributed so much, even after he knew he was not going to be involved in the third test.”

Even former Lions and Ireland Test star Rob Kearney couldn’t quite believe that it was again Steyn who broke Lions hearts.

And then there was this one, that trended and was widely shared and liked.