Lions celebrations over; Boks turn their attention to Los Pumas

The team to play against Argentina this weekend will be named on Tuesday. 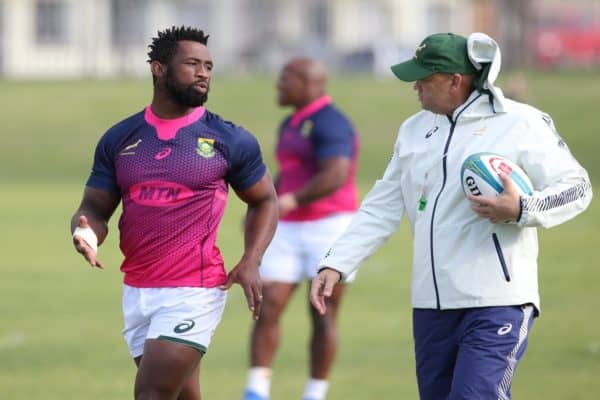 The Springbok players and coaches hardly had enough time to celebrate their win against the British and Irish Lions and they had to start focusing on their next assignment – Argentina in the Rugby Championship this weekend.

The Boks and Los Pumas meet in Gqeberha on Saturday, just seven days after the Bok swept the Lions series 2-1 after winning the third Test in dramatic fashion 19-16 last Saturday.

It is expected that the Bok brains trust will make a few changes to the starting team following the emotionally-draining and physically-challenging Lions series, but assistant coach Deon Davids was giving nothing away on Monday.

“We’ll consider the players’ performances, their workload, the opposition and injuries in considering the team makeup,” said Davids on Monday. “That is the case every week. We’ll decide if we need to rotate some players to build our depth or continue as is.”

The Boks have a slightly bigger squad once again after trimming certain individuals from the group throughout the Lions series.

“We’re coming from a tough series and we’re only a third of the way into our Test season. There’s the Rugby Championship to come and the end-of-year tour.

“There are some niggles in the squad but everyone is professional in the group and mentally aware of the next challenge.

“We celebrated the Lions series win on Saturday, but the focus is now very much on Argentina.”

Snyman, who missed the Lions series because of burns suffered in Ireland prior to the tour, was due to join up with the Boks was hiss rehabilitation work was done.

Davids said the Bok players were fully deserving of praise following what they had achieved living inside the bio-bubble.

“I must commend the players on how they adapted to this situation,” said Davids. “They experienced a lot of difficulties being in this bubble, but they have now also got used to the rhythm of it and it has been easy to shift from one day to the next.

“I must admit though it is nice to have a change of scenery; I am enjoying it and it is refreshing.”

The Bok team for this weekend’s Rugby Championship opener against Argentina will be named Tuesday lunchtime.