The world champions conceded four tries to the Australians as they crashed to back-to-back defeats in six days. 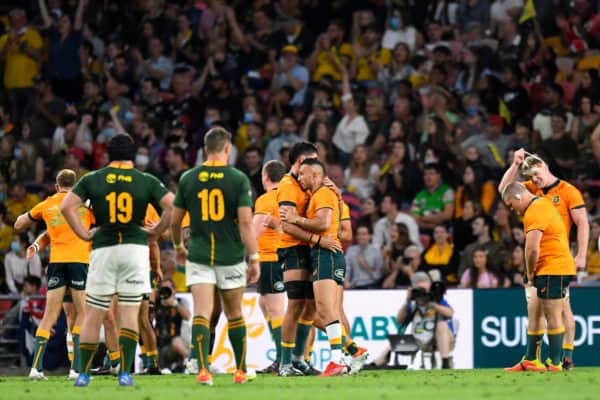 While the Australian players celebrate their win, the South Africans look dejected after the 30-17 victory by the Wallabies in a Rugby Championship match in Brisbane on Saturday. Picture: Albert Perez/Getty Images

Coach Jacques Nienaber said it was the worst Springbok performance in three years as they succumbed to a 30-17 defeat at the hands of the Wallabies in Brisbane on Saturday, which would seem to be a fair call based on how thoroughly dismal South Africa were in so many departments.

It started at the breakdowns, where the Springboks conceded a dozen turnovers on attack, the defence was astonishingly ineffective as South Africa missed 20 of their 88 tackles, and they were too lateral with ball-in-hand and poor in the basic skills of handling and passing.

“I was disappointed with every department of our play today, we were beaten hands down,” Nienaber said after the match.

“We have to figure out quickly why because I can’t put my finger on a reason at the moment and we have a massive challenge coming up next weekend against the All Blacks. We get tested differently by our Sanzaar partners and it has been a big eye-opener for us.

“It definitely wasn’t just our worst performance this year but our worst since 2018 when we lost to Argentina in Mendoza.

“We weren’t great at everything. The defence was not up to standard; it’s the first time we’ve conceded four tries since against New Zealand in 2018. We did have a bit of attacking opportunity, but there were lots of errors, too many with ball-in-hand.”

Skipper Siya Kolisi said he was shocked by how poorly his team had played, describing their preparation as being good.

“We’ve been training very well but then every single guy made mistakes today,” Kolisi said.

“You make a mistake at one maul and then it carries through to the next maul. We were losing things which we are normally good at, like physicality. Oh we need to look at ourselves alright and pull tighter together. We were well-prepared for this game but we just couldn’t enforce what we had planned.

“Especially at the breakdowns, we spoke about it on the field but just did not deliver. Losing breakdowns, especially the wide ones, was one of the big things we chatted about at halftime, but then it happened again in the second half.

“As players we have to take the responsibility for that. I wouldn’t go as far as to say our plan is not working, it’s just we did not implement it properly and we missed 20 tackles.”