All Blacks brace for ‘bully’ Boks in historic clash

"You can't trust them, you don't know what's going to happen on the day, so we've got to be prepared for everything." 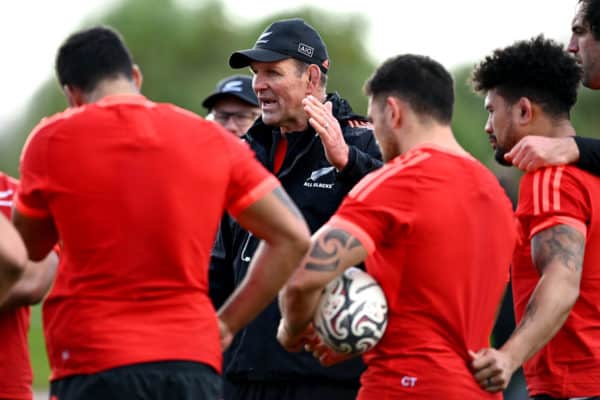 Assistant coach John Plumtree runs through drills during a New Zealand All Blacks training session. Plumtree said this weekend's Test against the Springboks would be a massive physical challenge for his players. Picture: Hannah Peters/Getty Images

Plumtree said the Springboks’ game had evolved since they won the 2019 World Cup and he was unsure what approach Jacques Nienaber’s men would take in the Rugby Championship fifth-round fixture in Townsville.

Plumtree’s New Zealand are undefeated in the Rugby Championship, leading the standings by 10 points, and can wrap up the tournament with a win.

ALSO READ: No time for emotion, says Davids, as Boks search for solutions

Plumtree, who has coached extensively in South Africa, said the Springboks had used a skills-based approach to become world champions before reverting to the physicality they are renowned for.

“We’ve seen them play some pretty good footy at the World Cup and against the (British and Irish) Lions as well.

“They can play, they’ve got some outstanding backs. So you can’t trust them, you don’t know what’s going to happen on the day, so we’ve got to be prepared for everything.”

ALSO READ: Barrett: ‘Boks will rise to challenge in 100th All Blacks Test’

Whatever the South African game plan, Plumtree said the All Blacks could expect a fierce contest from a side smarting over back-to-back losses to Australia.

“For the forwards, particularly, this is going to be the toughest-fought battle since I’ve been involved (in 2019),” he said.

“All the boys know that. Everything we do has to have more power, more speed. We’ve got to play the game at a high tempo, we can’t fall into the trap of allowing the game to slow down.”

Plumtree played down the signficance of the 100th Test meeting, saying the coaching group had not discussed it with the players.

“A milestone like that doesn’t help, we’ll just knuckle down and get the preparation done,” he said.