Gutsy Boks edged by All Blacks in epic 100th clash

The strategy of kicking everything away cost the Springboks in the end. 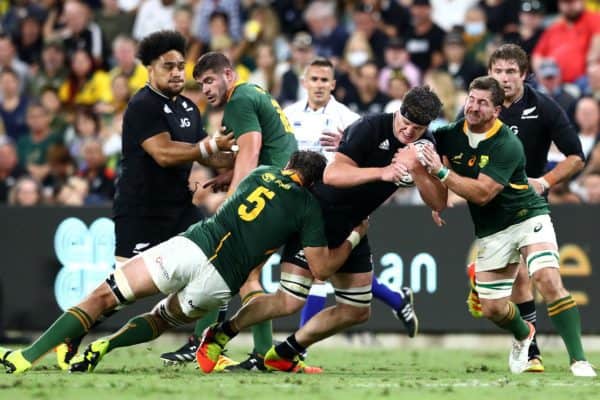 Scott Barrett charges forward for the All Blacks in the Rugby Championship match against the Springboks on Saturday. Picture: Getty Images

Apart from blood, guys and glory, and enormous set-piece prowess, the Springboks could not bring enough to the table with ball in hand, leading to a gripping 19-17 defeat at the hands of the All Blacks in an epic 100th Test between the two great rivals at Townsville on Saturday.

The Springboks were superb in playing their trademark pressure game. The scrum was dominant and their lineout was majestic, reducing the All Blacks jumpers to just standing and watching.

When New Zealand had the ball, they were harried and bashed by a feisty defence, with the Springboks causing the Rugby Championship winners big problems at the breakdown as well.

But pressure is meant to create opportunities to score and, apart from four penalties by Handre Pollard and a gifted try to Sbu Nkosi after a dropped kick, South Africa did no show enough intent with ball-in-hand. In fact, on a couple of occasions they had front-foot ball, in control of the game on the New Zealand 22, and they chose to turn possession into a 50/50 contest by launching bizarre up-and-unders.

The strategy of kicking everything away cost them in the end as, after Pollard had given them a 17-16 lead going into the last 10 minutes, a frazzled All Blacks side began to get desperate and coughed up more ball. Which the Springboks kicked straight back to them.

Eventually it was a brilliant angled, long-range penalty by fullback Jordie Barrett that snatched the spoils for New Zealand with just two minutes remaining.

The All Blacks started the match in chilling fashion as, with not much on for them in their own half, hooker Codie Taylor stepped superbly and burst clear, and one pass later wing Will Jordan was racing over for the try.

But as much as they tried to up the tempo, speed the game up and stretch the defence, the Springboks managed to drag them back into slow-mo rugby through sheer bloodymindedness. Siya Kolisi was immense as a harrying presence and Kwagga Smith was tremendous at the breakdown.

The kicking game tested the wits of the All Blacks three and, apart from Barrett, they did not look secure. But the Springboks were not smart enough to then capitalise on the turnover balls presented.

Bok supporters were left praising an incredibly brave, stout effort, but also mourning what could have been if they had just backed themselves with the ball-in-hand a little more.

Salmaan Moerat on his neck injury, his return to play and his Bok chance
4 hours ago
4 hours ago

Salmaan Moerat on his neck injury, his return to play and his Bok chance
4 hours ago
4 hours ago