Bok coach: Decision-making will have to be better in All Blacks rematch

“But we will be the first to say we could maybe have made better decisions at some stages," said Deon Davids. 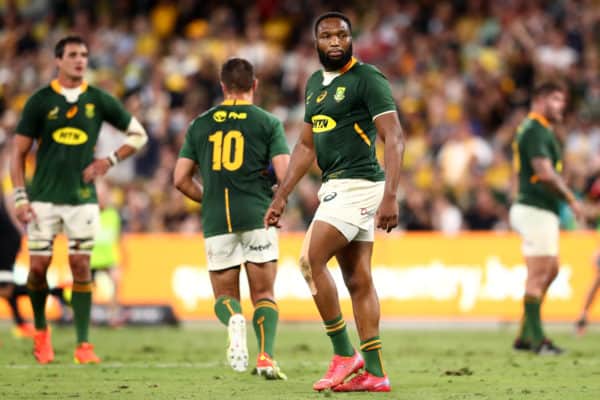 Lukhanyo Am of South Africa looks on after losing the Rugby Championship match against New Zealand last Saturday. Bok assistant coach Deon Davids said Monday the decision-making by the player sin the late stages of the match could have been better. The Boks lost to a late penalty. Picture: Chris Hyde/Getty Images

A neck-and-neck contest such as the 100th Test between the Springboks and the All Blacks last weekend invariably comes down to decision-making and South Africa forwards coach Deon Davids on Monday admitted that they could have made better choices in the last 10 minutes of the epic encounter in Townsville.

The Springboks were leading 17-16 and their brilliant pressure game continued to produce opportunities for them to close out the game.

But unfortunately, front-foot ball, when the momentum was with them, was kicked away too often and the All Blacks were able to counter-attack and earn the penalty which fullback Jodie Barrett slotted to give them a thrilling 19-17 victory.

“We’ve looked in-depth at our game-management in the last 10 minutes. You must remember the players were under tremendous pressure, there was a lot of pressure towards the end and great intensity,” said Davids on Monday.

“But we will be the first to say we could maybe have made better decisions at some stages. But things happen and there are different reasons for why things go wrong.

ALSO READ: ‘Heartbroken’ Boks will ‘leave it all out there’ in All Blacks rematch

“Sometimes it had to do with communication. A player has to decide what to do in a split-second based on what is in front of him.

“But we will need to learn from it and, based on the quality of players we have, I am sure we will be better this weekend against the All Blacks,” Davids said.