“We missed so much rugby last year because of Covid, we’re still not back to the standard we set in 2019, and that’s where we want to be." 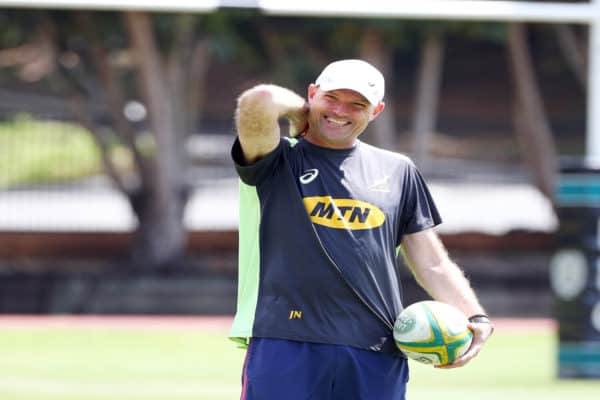 Coach Jacques Nienaber says it is not the time to experiment with a different team. Picture: Tertius Pickard/Gallo Images

This is not the time or the place to experiment!

That was the emphatic response by Springbok coach Jacques Nienaber on Tuesday when asked if he’d considered mixing up his team for Saturday’s final Rugby Championship match against the All Blacks on Australia’s Gold Coast.

The Boks, having lost three in a row – twice against the Wallabies and last week against the All Blacks – are out of the running in the competition and have nothing but pride to play for this weekend.

“It’s number one against number two on Saturday, one of the biggest Tests of the year,” Nienaber said ahead of the match.

“Sure, while it’s our goal to create squad depth ahead of the next World Cup, the bigger goal is to win Test matches. This is not the time to experiment… these Tests have the same intensity of a World Cup final.”

Nienaber has made only two enforced changes to the side that lost in the dying minutes (19-17) in Townsville last Saturday – Ox Nche coming in for the injured Frans Malherbe at tighthead prop and Jasper Wiese returning to the bench in place of the injured Marco van Staden.

With Nche taking over the No 1 jersey, Trevor Nyakane moves to the tighthead side of the front row.

“When the opportunity is there for me to rotate players, and give them Test match exposure, I’ll do so,” Nienaber said about his big tour squad.

“We missed so much rugby last year because of Covid, we’re still not back to the standard we set in 2019, and that’s where we want to be.

“We’re still building towards that, so when number one and two in the world are in action you pick your best available team.”