Five things we learned from the Rugby Championship

Missing a host of first-team regulars, the All Blacks' latest title again highlighted the depth of New Zealand rugby. 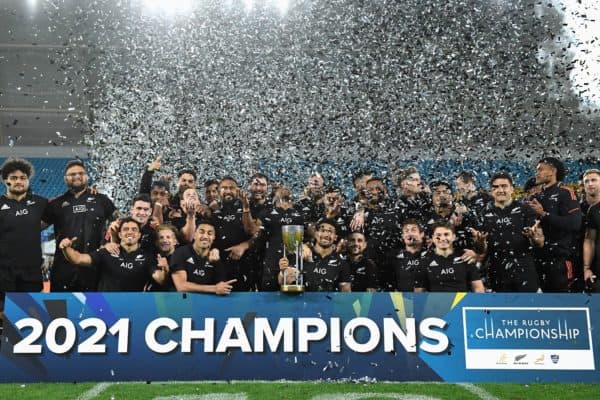 Here are five things we learnt from the Covid-hit six-round tournament:

South Africa saved their best till last and proved they were not bound to rigidly follow the relentless kicking script that had led them to three successive defeats.

Their enthralling 31-29 victory over New Zealand in their final match showed they could dominate up front and, while Faf de Klerk’s kicking game remained a valuable weapon in their armoury, could also take the All Blacks on out wide.

Coach Jacques Nienaber also outsmarted the All Blacks with his use of the bench, replacing his entire front row just before half-time, a tactic that turned the match.

“The moment we felt the first group has done their job, we will bring on the second group,” Nienaber said.

The performance may have come too late to prevent the All Blacks winning the Rugby Championship, but it underscored why the Springboks are the reigning world champions — and have again overtaken New Zealand as the number one ranked side.

The All Blacks put a minor form wobble last year behind them as they won the Rugby Championship with a match to spare despite missing a host of first-team regulars, again highlighting the depth of New Zealand rugby.

Ian Foster’s coaching staff have bedded in and the team look in ominous form despite a last-gasp defeat to South Africa on Saturday, partly because they appear to have finally managed to counter the rush defence that has troubled them since 2017.

Their only real drawback has been an occasional lapse in discipline.

“It just shows we’ve got a little bit of learning to do but I’m intensely proud of a campaign that we’ve taken one big step forward but we’ve got a few more to take,” said Foster.

“I’ve got no doubt we’ve grown considerably. I’m very proud of the way the guys have handled the last five to six weeks.”

Questions were being asked about coach Dave Rennie’s job after Australia lost three times to the All Blacks in the space of a month earlier this year.

But in a masterstroke — some might say a gamble — he shocked the rugby world by re-calling playmaker Quade Cooper after a four-year hiatus to stop the rot and was handsomely rewarded.

With a trusty boot and 70 Tests of experience, Cooper marshalled the backline and led Australia past South Africa 28-26 in a huge confidence booster that sent them on a four-game win streak — their first ever in the championship.

They have also uncovered a new star in classy winger Andrew Kellaway, who ended as the tournament’s top try scorer with seven in his debut season.

“We’re not trying to think too far ahead. We are still trying to grow our game,” said Rennie, whose re-building mission is starting to take shape leading into the 2023 World Cup.

Now ranked three in the world, they head to Japan this month — before a European tour against Scotland, England and Wales — believing they are once more a force to be reckoned with.

For the second year running, Argentina made a huge sacrifice to play the Rugby Championship with the team away from family on a months-long tour that also took in South Africa.

But they earned little reward, again proving to be the weak link with Mario Ledesma’s men crashing in all six games despite gallant defensive performances.

They also found themselves embroiled in a scandal with six players banned from their last match after breaching Covid rules.

With star playmaker Nicolas Sanzhez mostly sidelined through injury, they struggled to score, managing just five tries in six games while conceding 195 points, leaving them with plenty to ponder ahead of November games against France, Italy and Ireland.

Despite this, Ledesma said his team should be proud.

“After two months of a lot of effort and sacrifices… the boys have showed character,” he said.

Expanding the Rugby Championship has long been mooted to help grow the game, and Michael Hooper, for one, believes Japan could be a good fit.

The Top League has seen tremendous growth and the Wallabies captain had a stint there this year to get a taste, alongside current Test teammates Sean McMahon, Samu Kerevi and Quade Cooper.

“It’d be great to have Japan involved in some capacity… there’s so much water under the bridge to go but in terms of seeing a lot more of the Cherry Blossoms, it’d be great,” he said when asked about having them in the tournament.

Australian media have suggested Fiji should also be considered to make it a Six Nations, like its northern hemisphere counterpart, given a Fijian side will join Super Rugby next season.

“The Japan — or any expansion — opportunity would be something we’d look at post the World Cup (in 2023],” he said.