Sports fans have had their say and they don't like the limited edition Bok jersey to be worn this November in the UK. 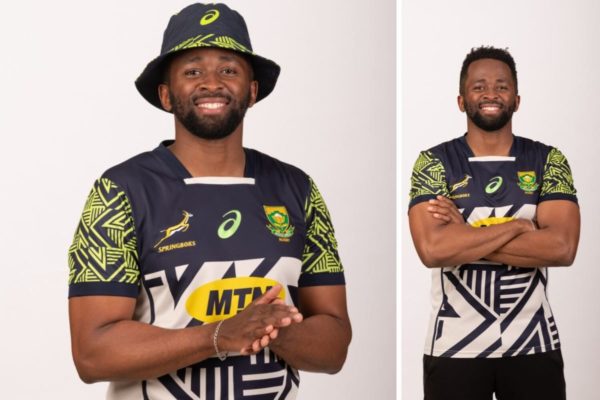 The limited edition Springbok jersey to be worn in one Test in the UK next month. Picture: Asics

South African sports fans have reacted with mixed responses to the news that the Springboks will play in a new-look jersey in one of their three UK Tests next month.

The Boks will wear the one-off jersey in one of the Tests against either Wales next weekend, Scotland or England.

Mbane says of the jersey on the Asics website: “It is largely inspired by the iconic African ‘imprint’. It also connects to my Xhosa-Nguni clan with the geometric lines.

“When you look into the jersey you see this interesting maze with this Africa feel.”

South Africans though aren’t convinced with the new design.

Jacques Maree said: “Honestly don’t which is worse, this new limited edition Bok jersey or that Blitzbokke kit that had them wearing what looked like white underpants over their shorts.”

Zwelithini Tunyiswa said about the design: “This shirt has more lines than the Department of Homeland Affairs.” He added, “This shirt reminds me of old SABC test signal.”

Alex Goldberg said: “Do I snapscan this … 7s perhaps, but not the Bok.”

Riaan van Wyk was also taken aback by all the straight lines and posted a picture of a war ship that may or may not be real.

The majority of fans who reacted to the story on sarugbymag.co.za were critical of the jersey.

Some asked if the jersey had a built-in QR code to be scanned, while others said the jersey was “horrible”, “terrible” and “when you do design work in ms paint or word.”

Well-known rugby commentator @Oom_Rugby also voiced his opinion: “when you scan it with your phone, it takes you to rassie’s video.”

The new jersey is available online and in store at SARugby, Totalsports, Superbalist and Takealot.com.