Springboks power past Scotland at Murrayfield

Makazole Mapimpi scored two tries as the South Africans made it two from two in the UK after beating Wales last week. 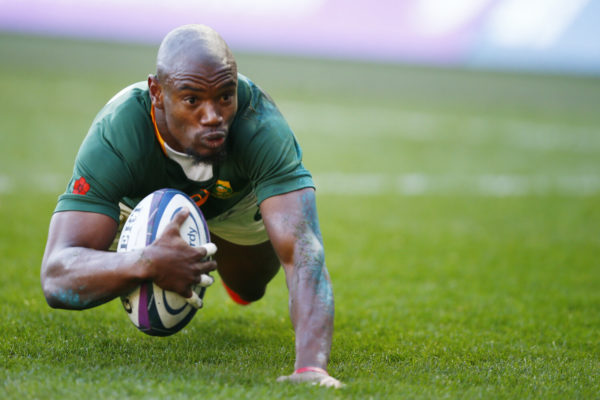 Springbok wing Makazole Mapimpi goes over for one of his two tries against Scotland in Edinburgh on Saturday. Picture: Steve Haag/Gallo Images

A monstrous forward and defensive performance from the Springboks saw them overturn a halftime deficit to claim a comfortable 30-15 (halftime 8-10) win over Scotland at Murrayfield on Saturday afternoon.

A powerful performance from lock Eben Etzebeth saw him claim deserved man of the match award, but there were a host of top performances with left wing Makazole Mapimpi running in a double and captain Siya Kolisi again putting in an immense shift in a superb all-round showing from the team.

It was a dominant start to the match for the Boks as they camped in the Scotland half for the opening 15 minutes, but couldn’t make their possession and territory count despite having numerous chances to open the scoring.

They had three early chances to go for goal but instead kicked to touch, two of them on the home sides 5m, but immense defence from Scotland saw them turn over and clear their lines every time.

In the 17th minute Scotland then took the lead against the run of play, with the Boks on attack in their 22m again they lost the ball and right wing Duhan van der Merwe made a fantastic break into the Bok half where he was brought down near the 10m in front, with the tackler not rolling away.

Flyhalf Finn Russell stepped up and slotted the easy penalty to put his side ahead 3-0, but then missed his next shot two minutes later after another breakdown infringement.

This allowed the Boks to draw level in the 24th minute as Scotland were pinged at the breakdown on their 22m in front, with flyhalf Elton Jantjies knocking it over.

In the 29th minute Mapimpi then scored his  first as a turn over at the breakdown from Lukhanyo Am allowed the Boks to attack from broken play, spreading the ball quickly and ending with Kolisi feeding Mapimpi to outstrip the cover defence and go over for an unconverted score.

Six minutes later Scotland then  replied as an impressive attack in the Boks half saw them show some great offloading skills, sending the ball down the line and ending with fullback Stuart Hogg running in to score next to the posts, with Russell’s conversion putting them 10-8 up.

Russell missed a final chance to stretch their lead on the halftime hooter, sending a penalty across the face of the uprights.

The second half then saw a massive response from the Boks as they stormed into an eight point lead in the 51st minute as first Mapimpi rounded out his double three minutes into the half after a break from inside centre Damian de Allende, with Jantjies adding the extras and then slotting a penalty for a 18-10 lead.

Four minutes later the Boks went further ahead as another breakdown infringement from the home side allowed Jantjies to slot his third penalty.

However the Scots then hit back in the 58th minute as they kicked a penalty onto the visitors 5m, secured the line out and attacked with Van der Merwe looping around and then feeding Hogg to score his second, as Russell’s missed conversion left the score 21-15.

That was as close as Scotland got as the Boks then firmly shut the door in the final quarter of the match, as the bench performed superbly, with some brilliant defence constantly keeping the home team on the back foot.

The huge defensive pressure saw the Boks receive four kickable penalties in the final 15 minutes, with replacement flyhalf Handre Pollard missing the first, but nailing the second and fourth while replacement fullback Frans Steyn knocked over a long range effort in between to give them an impressive win.