South Africa demolished England at the scrum in the 2019 World Cup final. 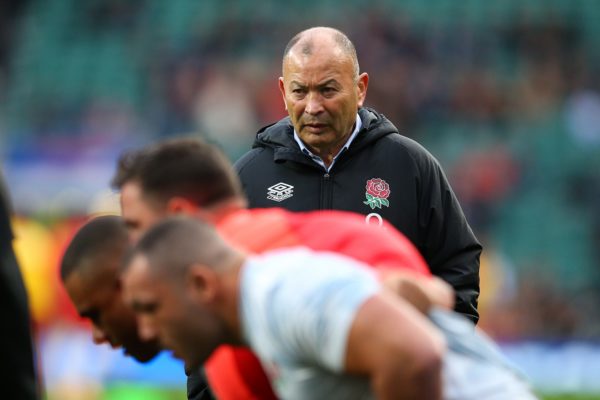 England coach Eddie Jones looks on during a warm-up session ahead of their recent match against Tonga. Picture: Getty Images

Eddie Jones believes any ideas South Africa have regarding a “weak” England pack will be misplaced when the teams meet at Twickenham on Saturday.

The last match of the year for both sides will also be the first time they have met since South Africa overwhelmed England 32-12 in the 2019 World Cup final in Japan.

But England coach Jones was in bullish mood ahead of a fresh confrontation with a fearsome Springbok pack and the world champions’ renowned ‘Bomb Squad’ of replacement front-row forwards.

And that’s despite injuries and Covid-19 meaning England novices Bevan Rodd and Jamie Blamire will pack down in a front row featuring experienced prop Kyle Sinckler — with Joe Marler on the bench as the seasoned loosehead is only expected to come out of self-isolation on Thursday.

South Africa demolished England at the scrum two years ago, with Jones telling reporters after naming his side on Thursday: “Siya Kolisi (the Springboks’ captain) after the World Cup final, said he knew how to beat us.

“Obviously their game is based on physicality so the implication is that they can go over our forward pack. But our English forward pack won’t be weak on Saturday.”

The veteran Australian coach added: “We don’t have a ‘Bomb Squad’ like South Africa are so proud about, but we have Joe Marler and Will Stuart.”

Jones has again opted to play one of his backs out of their usual position, with Joe Marchant recalled on the wing this weekend.

“We know that South Africa are going to come through the air,” said Jones. “We feel that Joe Marchant is one of the best in England in the air so it brings an ability to contest in the air really well.”

England captain Owen Farrell has been ruled out of the final match of a series that has featured wins over Tonga and Australia by an ankle injury, with fly-half Marcus Smith now alongside Manu Tuilagi and Henry Slade in midfield.

ALSO READ: Who, where, when – What you need to know about Rassie’s appeal

South Africa will be without Rassie Erasmus this weekend after their World Cup-winning coach was given a two-month ban by World Rugby on Wednesday following his stinging criticism of match officials during the Springboks’ 2-1 series win over the British and Irish Lions.

Erasmus, who moved to the director of rugby position with South Africa after the World Cup, published a 62-minute video slamming the role of referee Nic Berry during July’s first Test loss.

The often outspoken Jones, however, declined to comment on the independent disciplinary hearing verdict given Erasmus has appealed.