Spirit of Rassie will drive Springboks in England showdown 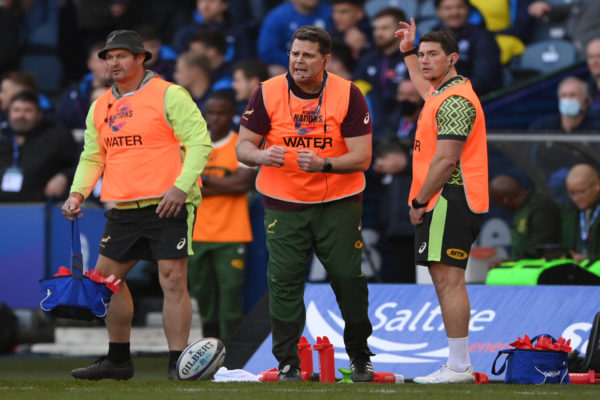 South African rugby's director, Rassie Erasmus (centre), talks to the Springbok players from the sideline, but following his banning by World Rugby this week, Erasmus won't be allowed at Twickenham for the match against England. Picture: Stu Forster/Getty Images

South Africa will be inspired by the spirit of Rassie Erasmus when they face England at Twickenham on Saturday even if their director of rugby is not with them in person.

Erasmus has appealed against a two-month ban from all rugby activity for his criticism of referee Nic Berry in July during this year’s series against the British and Irish Lions.

The 49-year-old former South Africa back-row jokingly posted on social media a photo of himself in camouflage, amid suggestions he might try to gain entry to Twickenham.

And in a further jibe at World Rugby’s disciplinary procedured, Erasmus later published a photo of a pint of Guinness with a caption saying “I do however get the feeling the 2 months will not be so bad as feared!!”.

Erasmus, who oversaw South Africa’s 2019 World Cup win against England, published a 62-minute video slamming the role played by Berry during the Springboks’ first Test loss to the Lions in July.

South Africa went on to win the series 2-1, further underlining Erasmus’s status as a national hero, with many Springbok fans dismayed by the punishment handed out by World Rugby despite the “character assassination” Australian official Berry said he had been subjected to by the Springboks’ supremo.

Now they hope Erasmus’s absence will provide them with extra motivation in their first match against England since that 32-12 World Cup final win in Yokohama.

It is the final game of the year for two teams who are unbeaten in this year’s November internationals.

Stick added: “We’re going to miss him, yes. But one thing I guarantee you for sure is that his spirit will always be there. We know that by heart.

“We love him and care for him and we’ve got a lot of respect for him. For us it will probably be more motivation to play even better because we know what the gentleman has done for a lot of us in the team.

“We really care and will play for him for sure. He’s a very special guy.”

ALSO READ: Thank you World Rugby; all you’ve done is fire up the Boks

South Africa captain Siya Kolisi, speaking alongside Stick, was at a loss to explain how England coach Eddie Jones thought he had accused the Red Rose pack of being “weak” following the World Cup final.

“I’m still trying to figure out when I said all those things,” said a bemused Kolisi, with the Springboks renowned for their forward power.

“I never speak about the other team in that way. I’ve never spoken like that before. I don’t remember saying that,” the 30-year-old flanker added.

“We know how we want to play rugby and that’s what we pride ourselves on. We do our research on how they want to play. We want to make sure our plan works against their plan.”