We win together and not qualify together – Middendorp

Kaizer Chiefs coach Ernst Middendorp believes it was just not meant for his team to go through to the next round of the Nedbank Cup after they were eliminated by Highlands Park on Saturday afternoon. 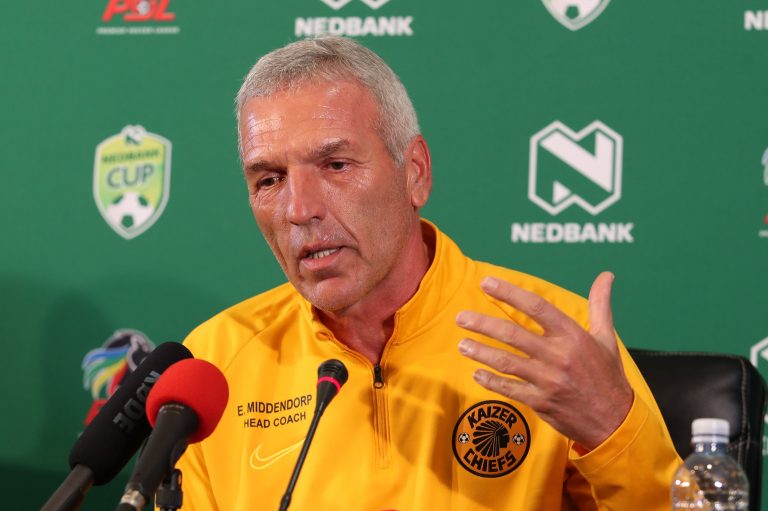 The Lions of the North won the penalty shootout 5-4 after the game had ended 1-1 in regulation time.

Amakhosi star Khama Billiat missed his kick, hitting the upright in the sudden death stage and Musa Nyatama ferried Owen Da Gama’s side to the next round by sending Itumeleng Khune the wrong way and hitting the back of the net to win it for Highlands.

Middendorp admitted that it was disappointing for them to get knocked out so early but said the conditions at Makhulong Stadium were never favourable for his team which a heavy downpour damping what could have been a spectacle.

“Let’s go to the circumstances… The circumstances under which the game was held here. The conditions to pass, to control the ball, to combine were made nearly impossible,” said the 61-year-old mentor afterwards.

On top of the unfavourable conditions, Amakhosi faced an awkward team who are lethal on a counter attack with their speedy attackers.

“You play against a deep sitting team you clear the balls and you start again… that’s what was happening. Then to lose or to not qualify through the penalty shootout is always something er… but it has happened. It is not what we were thinking.

“We win together and not qualify together. You cannot be happy. We have not qualified for the next round and now the focus in on preparing for the next game,” he said.