Kaizer Chiefs might be huffing and puffing on the field but they don’t seem to be having trouble finding their rhythm off the field. 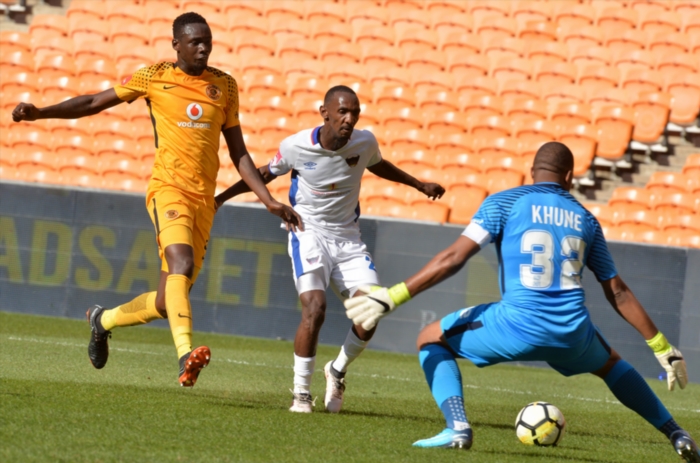 Thabo Rakhale of Chippa United score a goal while Erick Mathoho and goalkeeper Itumeleng Khune looks on during the Absa Premiership match between Kaizer Chiefs and Chippa United at FNB Stadium on April 07, 2018 in Johannesburg, South Africa. (Photo by Lefty Shivambu/Gallo Images)

Bafana Bafana goalkeeper Itumeleng Khune has been criticised for conceding goals this season. Amakhosi have had a tough run in the first half of the 2020/2021 Dstv Premiership season failing to put any of the opponents under pressure or to win a game convincingly.

A video of midfielder Lebogang Manyama, defender Eric Mathoho and Khune has surfaced on social media. The trio are at an unknown location with a group of people dancing and playing music.

Mathoho has often shared videos of himself playing musical instruments with friends on social media with many fans asking him he has plans to pursue a career in music once he hangs up his boots.

In the lasted video doing the rounds on social media, the trio are singing along to songs Mathoho is playing with a friend who is on the piano while the Bafana Bafana defender is on the drums.

Khune is seen in the video dancing with a group of ladies doing the popular train like dance move known as haka matrokisi. The video surfaced day after Chiefs played to a goalless draw with Angolan side CD Primeiro de Agosto in a Caf Champions League clash.

Supporters have questioned the players’ commitment to turn the club’s fortunes around this season based on their conduct off the field.