The Moroccans are the favourites along with hosts Cameroon and twice champions the Democratic Republic of Congo to win a competition restricted to home-based footballers. 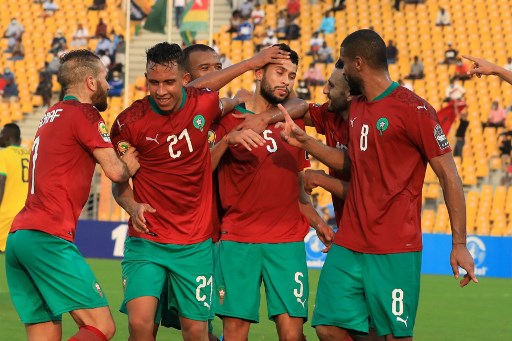 Yahya Jabrane converted a retaken penalty to give Morocco a 1-0 victory over Togo Monday in Douala as they seek to become the first back-to-back winners of the African Nations Championship (CHAN).

In the second match of a Group C double-header at the Stade Reunification in the Cameroonian economic capital, Rwanda and Uganda drew 0-0.

Jabrane had his first spot-kick saved by Abdoul-Moubarak Aigba, but the goalkeeper moved forward off his line before the penalty was taken.

Aigba dived to his right again when the kick was retaken on 27 minutes, but Jabrane planted the ball into the unguarded side of the goal.

Morocco had more chances in a lively match, but the heroics of Aigba and wild shooting meant that for the fourth time in the first six matches of the tournament, a solitary goal secured maximum points.

The Moroccans are the favourites along with hosts Cameroon and twice champions the Democratic Republic of Congo to win a competition restricted to home-based footballers.

They are captained in Cameroon by Ayoub el Kaabi, the nine-goal star when hosts Morocco triumphed three years ago after winning five of six matches, including hammering Nigeria 4-0 in the final.

Togo, the only debutants among the 16 challengers, have experienced glory and gloom en route to a tournament that was postponed twice last year due to the coronavirus pandemic.

After scraping past Benin in their first qualifier, Togo stunned Nigeria to secure a place at the sixth edition of the Nations Championship.

But tragedy struck twice in the build-up to Cameroon with the deaths of stars Kossi Koudagba, from malaria, and Toyi Awi, who collapsed clutching his chest during a training session.

Uganda, who are coached by Northern Ireland-born Johnny McKinstry, continue to disappoint in the Nations Championship with just one victory in 13 matches spanning five editions.

The Nations Championship is a dress rehearsal for the 24-team Africa Cup of Nations (CAN) next January and February when hundreds of Europe-based professionals like Senegalese Sadio Mane will head for Cameroon.

Stadiums in Douala (two), Yaounde and Limbe are being used for the Nations Championship and two more, in Yaounde and Garoua, will raise to six the number for the Cup of Nations.