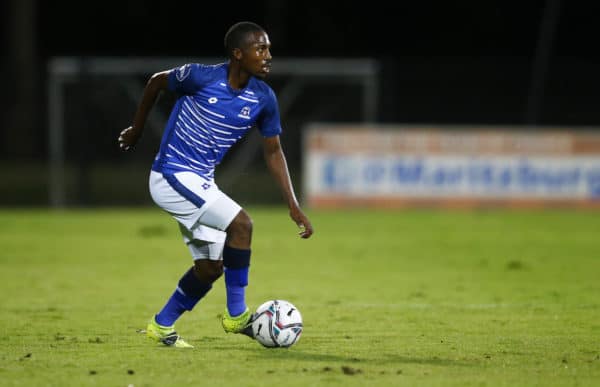 Bandile Shandu is on his way to Orlando Pirates. Picture: Steve Haag/BackpagePix.

Orlando Pirates are set to announce their new acquisition, Bandile Shandu in the next few days. The 26-year-old’s deal at current club, Maritzburg United ends on June 30.

Sources have told Phakaaathi that he has already secured a move to the Buccaneers.

“He is a Pirates player now. It is a done deal and he should meet his new teammates when Pirates reopen for preseason training early next month. Maritzburg were surprisingly good this time and were not bitter that he didn’t renew his deal as he opted to look elsewhere,” said a source.

“He is a product of the club and feels he has served them well over the years and now wants to test himself at a bigger club and Pirates were the first to call him and he was happy to go there.”

Shandu will be reunited with some of his old teammates in Fortune Makaringe, Richard Ofori and his childhood friend Siphesihle Ndlovu at Pirates. He will also have familiar faces in the technical team, having worked with both Fadlu Davids and Mandla Ncikazi during their days at the Pietermaritzburg based club.

He will, however, have to work really hard for his position in the team with Wayde Jooste having established himself at right back in the club last season. Jooste had a grand finish last season and endeared himself to the supporters with his pinpoint crosses from the right.

There is also still Thabiso Monyane who was not used much last season but will be looking to stake a claim for the position. Mthokozisi Dube is another one that Shandu will compete with as he is set to return from his loan spell at Golden Arrows, where he had a great season.

Shandu is, however, versatile and can also play in central midfield and on the wings, which stands him in great stead in the Pirates team.