'I still believe that I will get an offer in the DStv Premiership and I still have a lot to offer,' Mohomi told Phakaaathi. 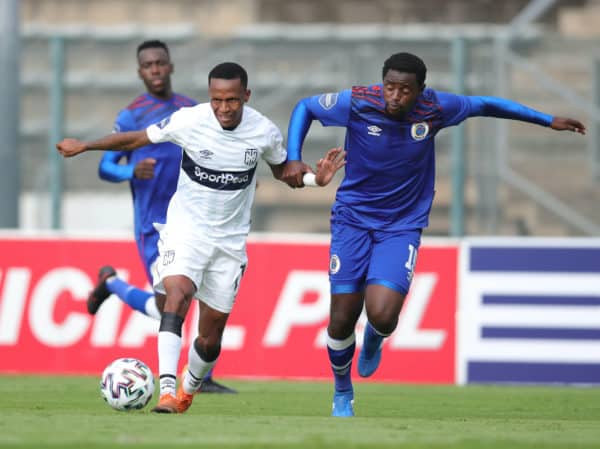 Lucky Mohomi (right) is currently without a club but hopes to find one soon ins the DStv Premiership. Picture: Samuel Shivambu/BackpagePix.

No matter what happens, Lucky Mohomi (right) has insisted that he is not keen on moving a league down to the GladAfrica Championship, insisting he still has a lot to offer in the top flight.

Mohomi was discarded by SuperSport United at the end of the season as they decided against giving him a contract extension.
He had spent a single season in what was seen as a move to revive his career, after a frustrating stint at Mamelodi Sundowns where he was plagued by injuries.

Mohomi signed for Sundowns from Free State Stars in 2016 and while he made over 20 appearances in all competitions in his first season, he barely played again after that, eventually being released by Sundowns in October 2020, when he was immediately snapped up by SuperSport.

“Work is work and it is hard when one is looking for a job in this career that we are in. Even if it is something outside of Gauteng, I am keen but I still believe that I will get an offer in the DStv Premiership and I still have a lot to offer,” Mohomi told Phakaaathi.

His representative, Shaun Roberts, has been working around the clock to find a team for the former Free State Stars midfielder but it appears as though nothing concrete is coming Mohomi’s way.

He was not surprised with his release from SuperSport, where he made a dozen appearances, netted two goals and provided a single assist.

“Even before the season ends and you know that you are going to be out of work, you get into discussions with your agents and talk about these things.

“We last spoke this past Sunday and there are teams that are there who are looking for my services but there is nothing yet confirmed. We will see how it goes,” said Mohomi, who has been linked with a move to Swallows FC and newly-branded Marumo Gallants.