With the automatic promotion spot already in Thanda Royal Zulu’s name and one relegation position now officially handed to Santos, only nine of the 16 teams in the National First Division (NFD) still have something to play for in the last two matches of the season. 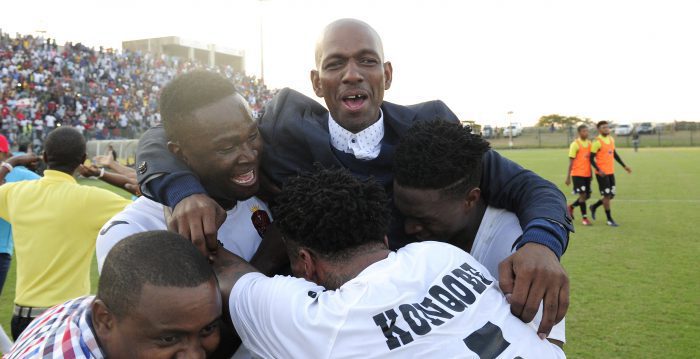 This sets the division up for a thunderous finish. The race resumes tomorrow afternoon with a full schedule of fixtures.

Usuthu – who are now fifth on the table with 44 points, three behind second placed Lidoda Duvha – have targeted a win against Jomo Cosmos at Princess Magogo Stadium tomorrow afternoon to ensure they stay in the race for a playoffs finish.

Usuthu scored an impressive 3-0 win over an already relegated People’s Team on Sunday, and coach Joey Antipas was happy with the three points which got them back in contention.

“It was a good win… the pleasing thing about it is that we didn’t conceded and we dominated the match,” said the 57-year-old mentor.

“It was important that we win, especially if we are to stay in the race for play offs. I believe we’re still in it with a chance,” added the former Chicken Inn coach.

He however said they have to quickly forget about that win and focus on winning the next match against a hard tackling and physically imposing Ezenkosi.

“All we need to do now is get ourselves ready for the last two fixtures and hopefully we can collect maximum points. We’re expecting a physical battle. Cosmos have height, their players are quite strong,” he said.

“The heart and never-say-die attitude were key. The guys just battled and battled. The guys stepped up and that’s what it’s all about,” said Ntshangase after Saturday’s win.

He will be hoping for more of the same from his teammates when they visit University of Pretoria tomorrow afternoon.