The Premier Soccer League has been urged not to approve the imminent sale of Thanda Royal Zulu’s Absa Premiership status to AmaZulu. 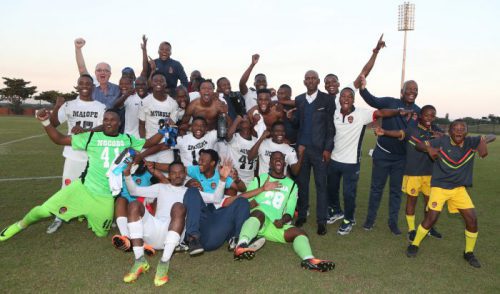 The City of uMhlathuze, a council which runs Richards Bay the city where Amabhubesi are based, says the sale would deny the people of the region a chance to have a top division team.

The City released a statement condemning the proposed sale.

The statement reads as follows:

“The City of uMhlathuze strongly condemns the alleged move by Thanda Royal Zulu’s chairman to sell the club to AmaZulu FC. The City urges the PSL board not to approve this deal as it is a daylight robbery for soccer fans in the northern part of KwaZulu-Natal.

The City is disappointed at the recent media reports citing the negotiations between AmaZulu FC and Thanda chairman Mr Pierre Delvaux, to sell his club’s Absa Premiership status without the consideration of the supporters’ hearts.

The City of uMhlathuze has, for years, invested millions of rands to the club as main sponsors with the intention of seeing the club developing to the top league. City people and soccer lovers invested their hearts when the club was struggling and supported with all they had until the glory days. Tax payers money was also invested in improving the stadium to accommodate the club’s success and just recently, R14 million worth of Fifa accredited stadium lights were installed and more improvements in the facility is underway worth millions of rands, which will go down the drain if the allegations are proven to be factual.

The City of uMhlathuze will fight with all it can within its powers to stop the transaction and ensure that Thanda Royal Zulu remains the pride of the people of the northern part of KwaZulu-Natal.

Thanda Royal Zulu is binded by a three-years Service Level Agreement (SLA) with the City of uMhlathuze of which will be activated to prevent any unfavourable transactions.

City Mayor Mdu Mhlongo registered his disgruntlement over the proposed sale, saying it will deprive his city a number of anticipated economic spinoffs and packs that comes with having a Premiership club in your city.

“We have been working hard to see Thanda climbing to the top leagues and fully supporting the club with our facilities and financially investing to the team knowing that when they play at the top level, our investment will be paid back and our people especially soccer lovers and youth will benefit, little did we know that we are assisting people who has no interest in investing in the City and in the club anymore.

“If these rumours were anything to go by, then we were deceived, looted and our emotions played. The allegations leaves us confused as we were continuing with high level engagement with corporates to seize the opportunity presented by Thanda and financially support. We appeal to Dr Irvin Khoza and his leadership collective in the PSL to flatly dismiss the alleged transaction and put the interest of soccer first,” Mhlongo said.