Thanda change name as they prepare for NFD

A Phakaaathi source has revealed that Thanda Royal Zulu have been renamed Richards Bay FC. 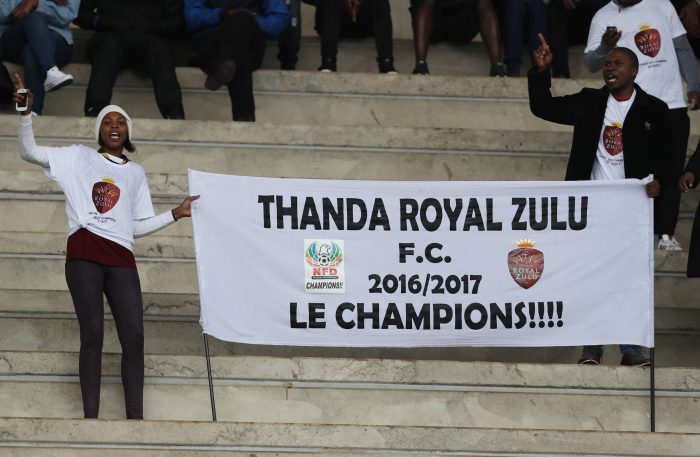 With the Premier Soccer League expected to make an official announcement on the sale of Thanda Royal Zulu’s Absa Premiership status to AmaZulu this week, Amabhubesi have already changed their name and started preparing for National First Division (NFD).

A Phakaaathi source has revealed that the new team who will be owned and managed by a consortium formed by Richards Bay businessmen has already started their preparations. And they have also renamed the team Richards Bay FC.

“The players have been brought on board and updated on everything. Those who were unlucky not to go to AmaZulu have resigned themselves to spending another season in the NFD,” said a source.

Meanwhile acting PSL CEO Mato Madlala has revealed that they hope to finalise the matter which has dragged for weeks before the end of the week.

According to Madlala, the PSL could not make a decision during last week’s Executive Committee meeting because there were some documentation which both teams needed to submit first.

“It would be nice if we could finalise this issue in a day or two,” said Madlala as quoted in the Daily Sun on Wednesday. She confirmed that they had received everything they needed and were going through the documents to ensure everything is in order.

“Once we are done processing the documents and we are happy with them, we will announce our final decision,” she said.

Phakaaathi reported this week that the documents which had been requested are the proof of purchase and payment which both teams have duly submitted.

We were hoping to see the mastermind in court, says Senzo Meyiwa's brother
4 hours ago
4 hours ago

We were hoping to see the mastermind in court, says Senzo Meyiwa's brother
4 hours ago
4 hours ago