Clint Fredericks was the hero for embattled Ubuntu Cape Town FC as his goal could play a huge role in the team avoiding relegation at the end of the season. 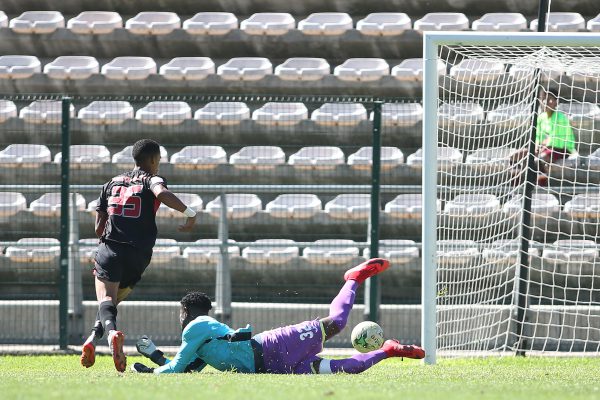 The 21-year-old netted the winning goal as early as the fourth minute and it helped Ubuntu collect the full points which saw them climb away from the relegation zone – even though they are still just fourth points above Mthatha Bucks who are bottom. Ubuntu will now feel they can avoid the chop after registering their second win in a row.

Jomo Cosmos meanwhile failed to build on their win as they suffered a 2-0 defeat to Mbombela United. Ezenkosi are however still three points away from a play-offs position.

Mbombela United 2 (M. Ndzimandze; S. Zwane) Jomo Cosmos 0
Tingwenyama fought for this result as Ezenkosi pressed them hard. But it was Swazi international, Mfanufikile Ndzimandze who proved his worth again giving the home side the lead in the first half before Siphesihle Zwane ensured the full points stay home with a goal late in the match.

Black Leopards 3 (M. Musonda; T. Nevhulamba x2) Super Eagles 0
Lidoda Duvha continued their push for a play-offs position finish with an emphatic win over embattled Super Eagles for whom relegation is again a possibility. Eagles had a good run at the beginning of the year following the hiring of Antonio Flores but the wheels have come off of late and the team have struggled for good results over the past few weeks.
The Nest Boys are now second from bottom with seven matches to go. Leopards are now fourth, just three points behind second placed Real Kings.

Richards Bay 1 (G. Roelf) University of Pretoria 0
The Rich Boys eased their relegation woes with yet another win against one of the form teams as Gregory Roelf’s late second half goals was enough to help the team collect a needed three points. They are however still just four points ahead of bottom placed Mthatha Bucks. AmaTuks’ chances of getting a ply-offs position are now in serious doubt.

Stellenbosch 1 (I. Rayners) Real Kings 2 (S. Mbatha; T. Kunene)
The Magic Boys jumped back to second position after this enormous away win over a stubborn Stellenbosch side who gave as much as they took. Siphiwe Mbatha and Thobani Kunene scored for the visitors while Iqraam Rayners added to his tally as well.

Ubuntu CT 1 (C. Fredericks) Mthatha Bucks 0
Clint Fredericks’ fourth minute goal was enough to seal a big win for Ubuntu who have found their rhythm and look like they will avoid relegation.

Witbank Spurs 0 Highlands Park 3 (P. Shalulile x2; T Makhele (og))
It is clear now – no one can catch the Lions of the North who have done everything to show they deserve a place in the elite league next season. Peter Shalulile was again the hero with two goals while Thabo Makhele was unlucky to score an own goal which killed off the match for the home side.

Uthongathi 0 CT All Stars 0
A win would have sent the Cane Cutters to a safer position while it would have brought Igugu leKapa closer to a play-offs. But the spoils were shared and a point did little for either side’s ambitions.

Royal Eagles 2 (S. Ngubo; D. Brown) Tshakhuma 0
A second win in a row for Royal Eagles saw them climb further away from the relegation although they are far from safety yet. Diminutive former Orlando Pirates striker Siyanda Ngubo and Diego Brown were the scorers for Eagles on the day.