Komphela responds to coaches who are after his position at Chiefs

Kaizer Chiefs coach Steve Komphela gave a long and winded response when asked about the rumours of Amakhosi having already found his replacement and said it doesn’t hurt him at all. 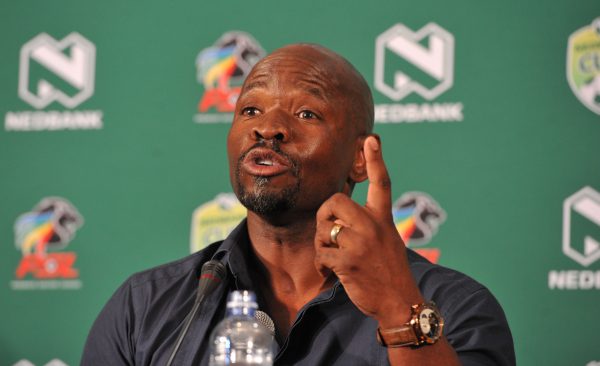 There have been a few coaches who have been linked with the Amakhosi job as it looks unlikely that the Naturena based club will renew his contract when it runs out at the end of the season.

“But sometimes it baffles you when a colleague declares things that are tempting to respond to. One thing my parents taught me is to refrain. They said if you feel that what you are about to say might not be positive, zip your mouth. I chose to keep my mouth zipped.

“But you start thinking when all is done and dusted and maybe you have moved on and then you start opening your mouth they say ‘but why didn’t he say this while he was at Chiefs. Is it sour grapes. Is he spilling beans’. No.

“But just a warning to my colleagues… Be careful what you wish for. Ambition kills. Leadership must be given and not demanded. Anybody who goes for power and demands power must be careful how power might handle them. Power shall be given and never taken because there might be resistance and where there is resistance there is conflict. Now it might not be physical conflict but idealistic. A difference in ideology is conflict.

“If I differ with a colleague who goes out there whilst holding a job I might just dust the table and go to his employer and say this guy is not loyal he is a hypocrite, he is a missionary. A statement to the employer about that particular employee who lacks foresight and depth in understanding that sometimes staying queit, intelligent and respecting saves you a lot.

“But then again it questions your integrity and honesty as a coach and a professional that whilst holding a post, you are busy cutting someone else’s chair. There is a possibility that what you do to others, will happen to you. Do unto others as you wish them do unto you. That’s the Bible that says that not me.

“I am saying this because I am asked something that is out there. There is nothing wrong with people wanting to work at Chiefs but I must respect the position I am at currently in. I am not a man who looks at personal interest, I am a man who looks at the principle, I am a man of process. And if you are a man of principle and process, the personal comes last. My blood and flesh means nothing.

“There was a statement made about Oscar Tabarez from Uruguay that he builds teams and he is involved in a long term vision without consideration to short term. Short term is more about personal survival and long term is about public survival. There is a Greek proverb they attach to this which says “a society grows greater when old man who plant trees plant them with an understanding that they are not going to sit in their shade”. That is selflessness. If Mandela had gone for 30 years and knowing that the shade he if planting is to benefit us. He was selfless. Had it been he planted it for himself he would not have served only one term.

“Nabo abo ndiyabaxelela ukuba ( I want those people to know that) it’s not hurting me but it might hurt the process because I don’t feel pain. I don’t hide behind people, I hide behind principle. And every time you are principle orientated nothing touches you because you assume and accept that as is principle dictates not the person and you will survive and will have no pain. People will be shocked that I am living without pain. I am living without pain because it is personal it is more professional principle and process orientated. The process comes first.”

Limited number of fans to attend MTN8 Final, no tickets on sale
18 hours ago
18 hours ago

Limited number of fans to attend MTN8 Final, no tickets on sale
18 hours ago
18 hours ago