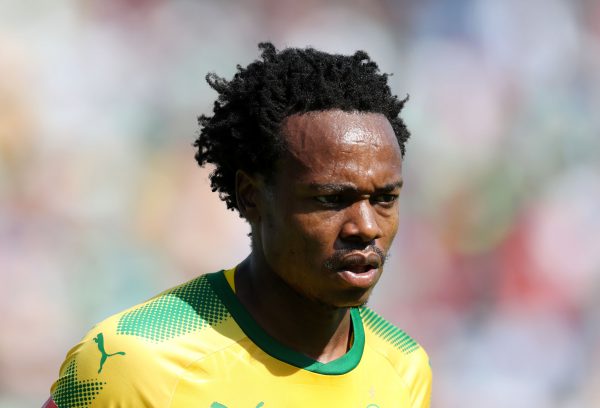 This after Sundowns boss Patrice Motsepe finally gave his approval for the transfer after several weeks of uncertainty during which time the Pretoria club had not been happy with the initial offer made by Brighton.

However, it is believed the English side have now raised their offer to around R50 million (just under 3 million pounds), with that figure to potentially rise to R65 million once add-ons come into play; much closer to the R70 million fee Sundowns were reported to have been looking for.

READ: Sundowns made to wait for Mahlambi

Should the deal go through, it would easily eclipse the roughly R25 million which was paid when Keagan Dolly left Masandawana for French side Montpellier, with former Ajax Cape Town striker Thulani Serero’s transfer to Ajax Amsterdam seven years ago in the same sort of financial ballpark.

While negotiations with Brighton have been underway, Tau has been boycotting Sundowns’ pre-season training. But according to a statement released by the club, the issue has now been ironed out.

“Mamelodi Sundowns is pleased to announce that the President of Mamelodi Sundowns Dr Patrice Motsepe gave instructions to the Management to finalize the deal with Brighton & Hove Albion FC (Brighton) after Percy Tau and his agent came to see him and apologised for disclosing confidential information to the media and for Percy Tau not reporting for training,” read the statement.

Tau, 24, won the PSL Player of the Season last season after scoring 13 goals in league and cup and creating a further 13 assists, while he has become the go-to man for Bafana Bafana up front over the last year.

The former Witbank Spurs player will be hoping to emulate the achievements of former Bafana international Stephen Pienaar at Premier League side, Everton, while going a couple of decades back, the likes of Benni McCarthy, Aaron Mokoena, Shaun Bartlett and Lucas Radebe have all flown the South African flag high in England.

Tau would have to compete with the likes of French winger Anthony Knockaert, Colombian striker Jose Izquierdo, German midfielder Padcal Gross and English forward Glenn Murray for a starting place.