USSA (University Sport South Africa) have won the 2018 SAB League U21 National Championship after beating Mpumalanga 2-1 in a thrilling final played at the King Zwelithini Stadium on Sunday. 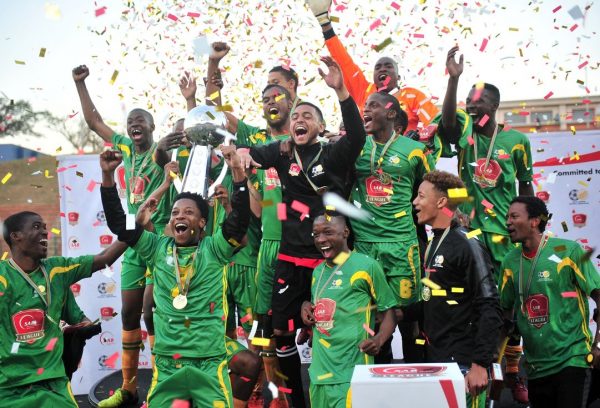 USSA winners of the 2018 SAB League National U21 Championships match between Mpumalanga and USSA at King Zwelithini Stadium, Durban on 22 July 2018 ©Samuel Shivambu/BackpagePix

This was USSA’s third title in the competition after winning it in 2011 and 2016 – the team walked away with twenty thousand Rands (R20 000) for their efforts, while Mpumalanga pocketed half of that amount.

All three goals were scored in the second half of the match.

USSA drew first blood through the tournament’s top goal scorer, Thabang Chuene who beat the Goalkeeper of the Tournament, Bonginkosi Nkosi in between the sticks for Mpumalanga.

Minutes later, the University side increased their lead when Kavendre Makhene put the ball past Nkosi again, to bring their tally in the tournament to 13 goals in six matches.

Mpumalanga pulled one back in a nail-biting finish after Khulekani Masemola scored a stunner for his side. Masemola’s goal was not enough as the game ended 2 – 1 to USSA.

This was USSA’s third final in a row, winning the Championship in 2016 and finishing as runners up to Gauteng in 2017.

Their coach, Godfrey Tenoff walked away with the Coach of the Tournament award this time around, while Chuene was named the Man of the Match – his second in the competition.

For Mpumalanga, this was a better showing as they won bronze last year. The team has never won the SAB League U21 National Championship, with their best place finish as runners up in 2013, 2015 and 2018.

Earlier in the day, 2018 winners Gauteng walloped Limpopo 7-1 to end in third place.

In an interesting scenario, the 2017 medalists were Gauteng, USSA and Mpumalanga – same as in 2018, but this year they have swopped places – USSA, Mpumalanga and Gauteng.