"No," was Solinas' quick response when asked if the thought of resigning had crossed his mind as he is known to quit when things don't go his way. 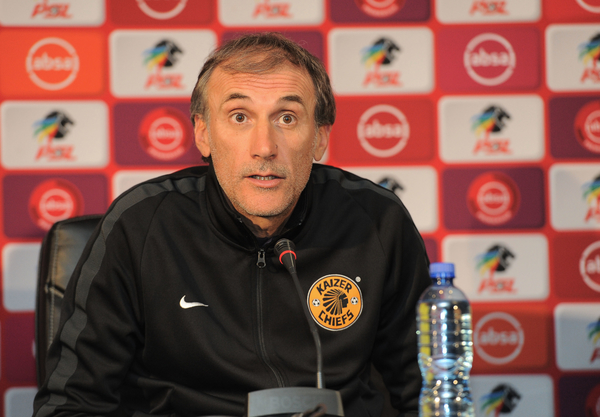 Things got a little more difficult for Kaizer Chiefs coach Giovanni Solinas and he was asked if he would be considering calling time on his Amakhosi career after yet another Absa Premiership defeat – this time they lost 2-1 to Golden Arrows in Durban on Saturday night.

“No,” was Solinas’ quick response when asked if the thought of resigning had crossed his mind as he is known to quit when things don’t go his way.

“No. Not worried,” he said when asked if he is worried about his future at Naturena.

Solinas’ side have had a difficult start to the Absa Premiership, so dropping points when they could have easily collected three and Saturday night was another example of that with their defence failing to deal with Abafana Bes’thende’s quick attackers and conceding two penalties which Limbikani Mzava converted in the first half. Leonardo Castro got one back for Chiefs in he second half.

“We were not supposed to lose this game. We created a lot of chances and we were fighting. But this is football. Check the possession statistics – we dominated them on every count.

“They defended for 90 minutes and only played on a counter. But we knew they would do that because they have fast players up front. But we made two mistakes and didn’t manage the space behind our defensive line, but it was only in those situations that we were not at our best,” he said.

Solinas also blamed the pitch, saying the difference between their 4-0 win against Zimamoto of Zanzibar in a Caf Confederations Cup was the pitch.

“I don’t remember a pitch like this in South Africa, even at my time with Free State Stars I don’t remember playing on such a bad pitch. The difference between today and last Wednesday is the pitch … the pitch in Port Elizabeth is perfect. But, also the opponents in the Premiership are stronger. Golden Arrows are stronger than Zimamoto. There are no easy games in the Premiership. We conceded two penalties and we lost it,” he said.

Things got so desperate for Amakhosi that goalkeeper Itumeleng Khune took a freekick towards the end of the match but his effort went agonisingly wide.