Chiefs edge City to extend their lead at the top 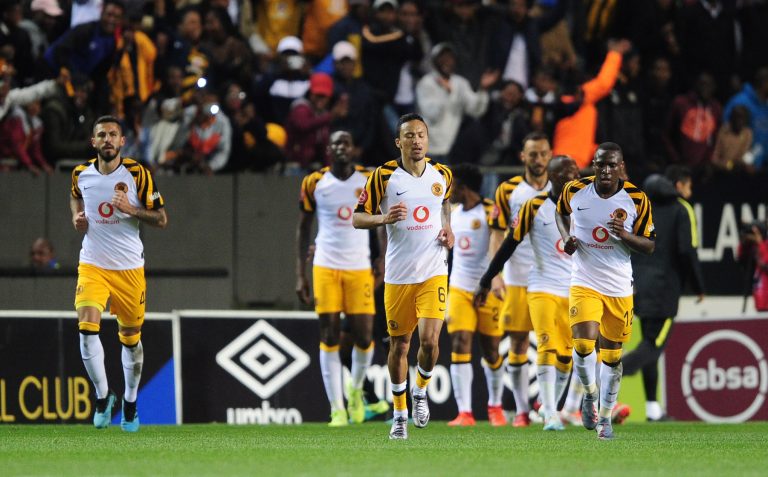 Kearyn Baccus of Kaizer Chiefs and his Chiefs teammates celebrate his winning goal during the Absa Premiership 2019/20 game between Cape Town City and Kaizer Chiefs at Newlands Stadium. (Ryan Wilkisky/BackpagePix)
Kaizer Chiefs gave a gallant second half performance to come from 1-0 behind to upset Cape Town City at their own back yard at Newlands Stadium on Tuesday night.
With his team trailing after Kermit Erasmus scored just four minutes into the game, Amakhosi coach Ernst Middendorp made some changes in the second half with Kearyn Baccus replacing Lazarous Kambole and Dumisani Zuma coming on for Siphesihle Ntiya-Ntiya. The changes worked magically for Chiefs and the visitors had the upper hand.
And as Lebogang Manyama stood over the ball ready to take a free kick, the Amakhosi supporters sensed something was about to happen and burst into wild celebrations. That indeed was the start of a glorious comeback for Amakhosi who won the match 2-1 to remain top of the Absa Premieship standings after four matches.

Manyama went on to curl the ball into the far corner where it found an unmarked Daniel Cardoso who headed into the net for the equaliser.

City however will have themselves to blame after failing to capitalize on some of the chances they created especially in the first half.
Siphelele Mthembu looked to have increased the home side’s lead three minutes later but he was ruled to have been offside although replays showed that the referee might have got his decision wrong.
Chiefs also gave as much as they received and could have equalized in the first half. Lazarous Kambole had an easy header from a Reeve Frosler cross on 12 minutes but the Zambian directed his effort away from goal when it looked easier to score with the City defence at sixes and sevens.
Erasmus had another effort, a header from a Mpho Makola cross cleared off the line by Mathoho with Akpeyi beaten.
Chiefs thought they had found the equaliser when Khama Billiat scored after a defensive misunderstanding by City but his goal was ruled out as offside three minutes into the second half.
With Amakhosi having found an equaliser and pushing for the winner, Tashreeq Morris almost upset them with snap shot bit he found Akpeyi awake and the Nigerian keeper tipped it away. But Chiefs defended the corner kick and immediately went on a counter and Kyrean Baccus scored the winner. Samir Nurkovic – who was a constant threat to the City defence – came close to scoring the third goal of the night and his second but missed target after an impressive with four minutes to the end.
Amakhosi, who are still top of the Absa Premiership standings with 10 points, will have another  two weeks break to work on their shortcomings with their next match set for September 14 against Polokwane City.