It was confirmed over the weekend that the person who passed away in a car crash, on 12 December 2020, was Madisha. 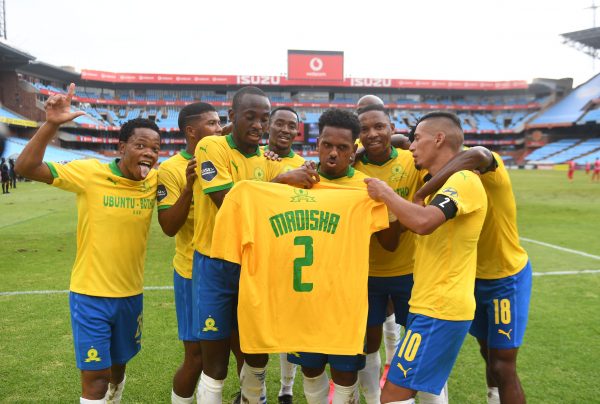 Mamelodi Sundowns players carrying the late Motjeka Madisha's jersey. Sundowns are said to be considering retiring the No.2 and 16 jerseys (Pic Sydney Mahlangu/BackpagePix)

It was confirmed over the weekend that the person who passed away in a car crash, on 12 December 2020, was Madisha.

Mngqithi says their victory over Chippa, which saw the Brazilians open a five point gap at the top of the DStv Premiership standings was for Madisha. Lebogang Maboe and Gaston Sirino scored the goals for Sundowns.

“The game panned out the way we thought, we knew that they would be planting five in the heart of midfield but we had planned for that, we wanted a direct confrontation with our full-backs and their wing-backs,” Mngqithi told SuperSport TV.

“Both of them did very well, Lebo [Maboe] was exceptional, Lyle [Lakay] was exceptional in dealing with those one versus ones but we didn’t score the goals we should have scored, I think today we could have easily scored six or more goals.

“But there are times in football you must accept that maybe Madisha wanted us to only scored two because we were playing for him today, so I think it’s fair to give him the two goals that he might have wanted.

“Because today [Sunday] I honestly believe we deserve to score more than four, five goals but that’s football for you.”

Sundowns will now change focus to the Nedbank Cup where they will face Stellenbosch FC in the last-32 round on Wednesday.