Both teams finished the game with 10 men. 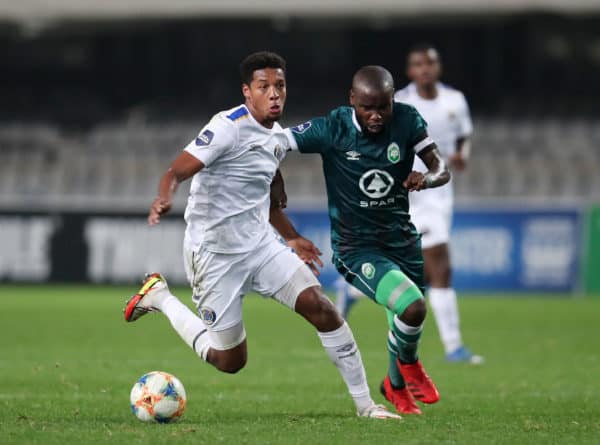 Jamie Webber of Supersport United challenged by Makhehleni Makhaula of AmaZulu during the DStv Premiership 2021/22 match between AmaZ at the Jonsson Kings Park, Durban (Muzi Ntombela/BackpagePix)

AmaZulu are yet to register a win this season after huffing and puffing to another goalless draw against SuperSport United in a DStv Premiership match in Durban on Tuesday night.

A lot is expected of the Durban side this season after their miraculous run that saw them finish second last term. But their start has been a worry and their supporters are starting to raise eyebrows at the uninspiring start to the campaign.

Usuthu, as the home side is known, started the better of the two sides but could not make much progress up front. The chances were few despite the hosts making some interesting entrances into the Matsatsantsa box.

Siphelele Mthembu had the best chance of the half when he was gifted the ball inside the SuperSport box. But he tried to dribble past the keeper but lost his footing and slipped, giving the ball away easily.

Thabo Qalinge came the closest to scoring for AmaZulu in the 26th minute but his shot from close range was tipped over by Ronwen Williams. SuperSport also had their own chances but nothing clear enough to accuse anyone of having wasted it.

The start of the second half was delayed for about 15 minutes with the problem with the lighting at the venue given as the reason.

In the second half, SuperSport came back a better side and gave as much as they took and pegged AmaZulu back. And while they created chances they couldn’t make any proper use of them.

Perhaps the most entertaining and heated action was on the sidelines where Usuthu coach, Benni McCarthy and SuperSport coach Kaitano Tembo had a go at each other and used some unprintable words.

McCarthy was heard telling someone that he had lost the ‘last seconds of respect I had for you’ during the altercation.