Coming up against the Buccaneers will surely be a huge test for the Chilli Boys. 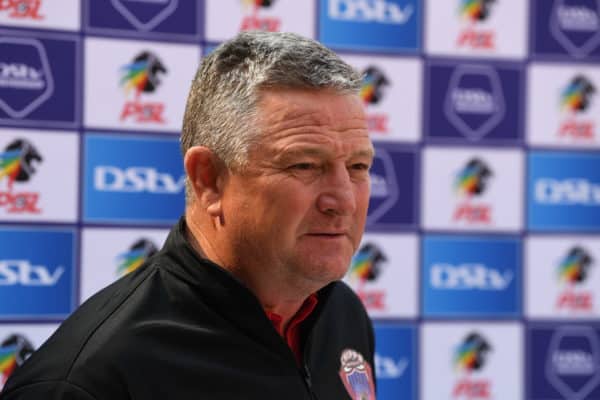 Gavin Hunt's Chippa United will be looking for a victory against Orlando Pirates. (Photo by Lefty Shivambu/Gallo Images)

Chippa United coach Gavin Hunt still bemoans the 1-0 loss to Royal AM in their last game of the DStv Premiership, and now they are aiming for a positive result against Orlando Pirates at the Nelson Mandela Bay Stadium on Saturday.

Losing to top flight football rookies didn’t sit well with the Chippa coach, especially through a penalty, which he insists it was not the right call after Riaan Hanamub was judged to have handled the ball inside the box.

“We didn’t play too well, especially in the first half, second half we were very good. I thought the penalty decision was harsh, it wasn’t a penalty. But I mean, that’s the rub of the green, that’s football for you. We definitely deserved a point there, right now we going to pick ourselves up and go again,” said the Chippa coach.

“We obviously had a shorter week (to prepare for the Pirates game). We had to come-back to PE (Port Elizabeth) because there was one flight, so we had to come back on Monday afternoon. It was a bit waste of a day, otherwise, we are okay.”

Coming up against the Buccaneers will surely be a huge test for the Chilli Boys, but having managed to hold league champions Mamelodi Sundowns to a goalless draw, it shows that Hunt’s men have it in them to upset any team on any given day.

However, Hunt knows that games aren’t the same and he will push his players to approach the tie against Bucs they way they have been planning to approach every game this season.

While Chippa are bruising from their first defeat of the campaign having secured a win and a draw before the Royal match, the Chilli Boys are coming up against Pirates side that should be high in confidence after securing their first victory of the season following their 1-0 win over Swallows FC in their last encounter.

After three league games, Pirates are in position four with five points, while Chippa are in seventh place with four points.