The new boys were just too clinical for Stuart Baxter’s static Amakhosi side. 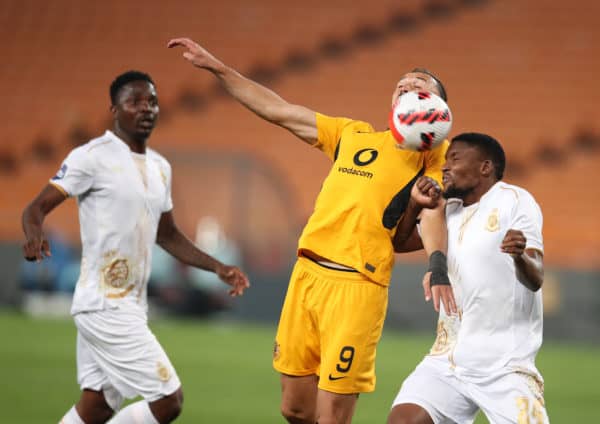 Thato Lingwati of Royal AM challenges Samir Nurkovic of Kaizer Chiefs during the DStv Premiership 2021/22 match at the FNB Stadium. (Muzi Ntombela/BackpagePix)

The new boys were just too clinical for Stuart Baxter’s static Amakhosi side who just could not get anything right on the day.

The win was Royal AM’s second in a row and will surely be celebrated until the early hours of Sunday. The party had already started at FNB where club president Shauwn “MaMkhize” Mkhize and her entourage were balting in the stands during the game.

Royal AM almost had a perfect start with Victor Letsolalo hitting his shot against the upright after finding space inside the Chiefs box and easily evading Erick Mathoho.

Chiefs then took control of the game but just could not get into the right spaces. But they could have taken the lead in the 17th minute when a smooth build up play ended with Alexander Cole set through on goal. He however sliced his shot wide with Peter Nyame at his mercy.

Letsoalo put the visitors in front in the 34th minute with a low header to connect a cross from Levy Mashiane. The took the header between two Chiefs defenders.

Amakhosi were forced into making an early substitution towards the end of the first half when Phathutshedzo Nange was injured. Agay Akumu took his place.

Chiefs had a penalty appeal denied by the referee early in the second half after Khama Billiat was fouled inside the box.

Things crumbled further for Chiefs in the 63rd minute when debutant Njabulo Ngcobo committed a foul just outside his own box. Letsoalo scored an impressively taken ball from the resultant free kick to make it 2-0.

Chiefs halved the lead in the 73rd minute with Sifiso Hlanti scoring with a free kick that deflected off a Royal AM defender and beat Nyame.

But just as they thought they could now fight back, they conceded again. Second half substitute, Sibusiso Mabiliso was unlucky to deflect a cross from the right by Royal AM past Petersen to give the visitor’s lead some cushion again.

Royal AM added more wound when they scored the fourth goal to win the game 4-1.