Middedorp not happy with performance despite United victory

'It was definitely not a game from a soccer (point of view) you would want to watch again,' said the Maritzburg head coach. 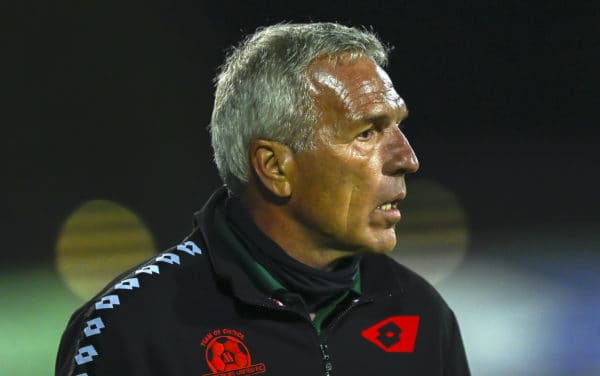 Ernst Middendorp was pleased with the points, if not the performance. Picture: Gerhard Duraan/BackpagePix.

Maritzburg United might have got away with a win in their DStv Premiership clash with Marumo Gallants on Wednesday, but the Team of Choice head coach Ernst Middedorp was not pleased with his side’s display.

Maritzburg got the winning goal late in the game at the Harry Gwala Stadium, courtesy of former French youth international Amadou Soukouna.

This saw the KwaZulu-Natal outfit register back to back wins having edged Baroka FC 1-0 in their previous match.

With only four games played, Middedorp believes the wins will help the team gain confidence as he tries to find the right combinations with a number of new players in his squad.

“It was definitely not a game from a soccer (point of view) you would want to watch again. The quality was not there in a way that we would want to see it,” said Middendorp.

“But I mentioned before the game that we have six new players in the line-up. You could see the connection is not there, the individual belief to provide a certain performance. I know I see the players at training and they do much better.

“But it’s good, this is what happens in soccer at the beginning of the season … it’s about collecting points. It’s about building confidence and going step by step. I think we played four games, two home and two away and in total we have six points, I think it’s a fantastic result.”

Maritzburg will be looking to make it three victories in a row when they travel to Tshwane for a meeting with SuperSport United on Saturday.